WORLD Irish government in jeopardy ahead of key Brexit talks

Irish government in jeopardy ahead of key Brexit talks 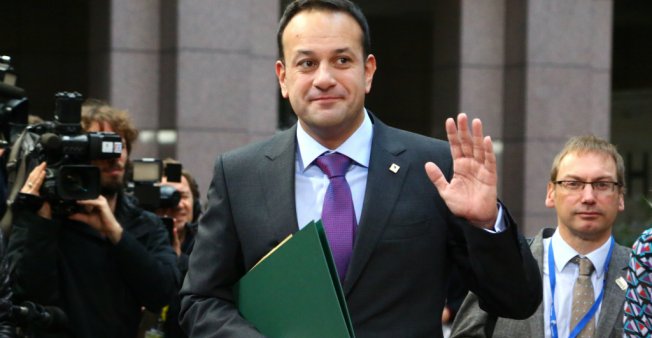 Ireland's government was fighting for its survival on Friday after the party propping it up announced plans to break their agreement becauseof the handling of a policing scandal.

The domestic crisis has hit just weeks ahead of a key European Union summit on Britain’s plans to leave the EU, a large portion of which hinges on Irish issues.

Prime Minister Leo Varadkar is due to play a major role in the Dec 14-15 summit, telling EU leaders whether Ireland believes sufficient progress has been made on the future border between Ireland and Britain’s province of Northern Ireland.

It will be the only UK land border with the EU after Brexit.

Varadkar’s minority Fine Gael government could collapse, however, if the country’s second largest party, Fianna Fail, carries through on a threat to vote next Tuesday for the dismissal of Varadkar’s deputy.

Fianna Fail on Thursday shocked parliamentary deputies by announcing it planned to introduce a motion of no confidence in Deputy Prime Minister Frances Fitzgerald over her handling of a legal case involving a police whistleblower.

“Ireland does not need an election right now,” Foreign Minister Simon Coveney told reporters during a trip to Brussels.

“The main opposition party... are risking an election at a time when there are some really, really serious issues for the government to manage in the national interests,” he said in a reference to the Brexit negotiations.

The border between Ireland and Northern Ireland is one of three issues Brussels wants broadly solved before it decides next month on whether to move the talks onto a second phase about trade, as Britain wants.

The other issues are Britain’s financial settlement on leaving the bloc and the rights of EU citizens living in Britain.

Coveney told parliament on Thursday that the government was not yet ready to allow the talks to move on to the trade issues and needed more clarity from London.

Fianna Fail said it would submit the motion of no confidence on Friday, but its three-year deal to support Varadkar’s government, signed 18 months ago, will not collapse until it votes for the motion on Tuesday.

A senior party member said Fitzgerald would have to resign to defuse the crisis, but said there was time for talks between the two party leaders before Tuesday.

“We don’t feel there is a need for a general election on this issue... There’s a long way to go until Tuesday,” senior Fianna Fail member Dara Calleary told state broadcaster RTE.

The government on Friday said it would not ask Fitzgerald to resign.

“What Leo Varadkar is not going is he’s not going to abandon his Tanaiste,” Coveney said, using the Irish term for deputy prime minister.

A breakdown of the government’s cooperation deal, which has worked relatively smoothly up until now between two parties that differ little on policy but have been bitter foes for decades, would likely lead to an election in December or January.

Since Varadkar’s appointment as Fine Gael leader in May, his party has narrowly led Fianna Fail in opinion polls that suggest both parties would increase their support but still struggle to form anything but another minority government.

The Fianna Fail move comes after Fitzgerald admitted she was made aware of an attempt to discredit a police whistleblower in a 2015 email, but failed to act. Fine Gael say she adhered to due process.

The case relates to a whistleblower who alleged widespread misconduct in the force. His treatment by the authorities led in 2014 to the resignations of the then police commissioner and justice minister.