WORLD Is it the right time for African countries to reopen economies?

Is it the right time for African countries to reopen economies? 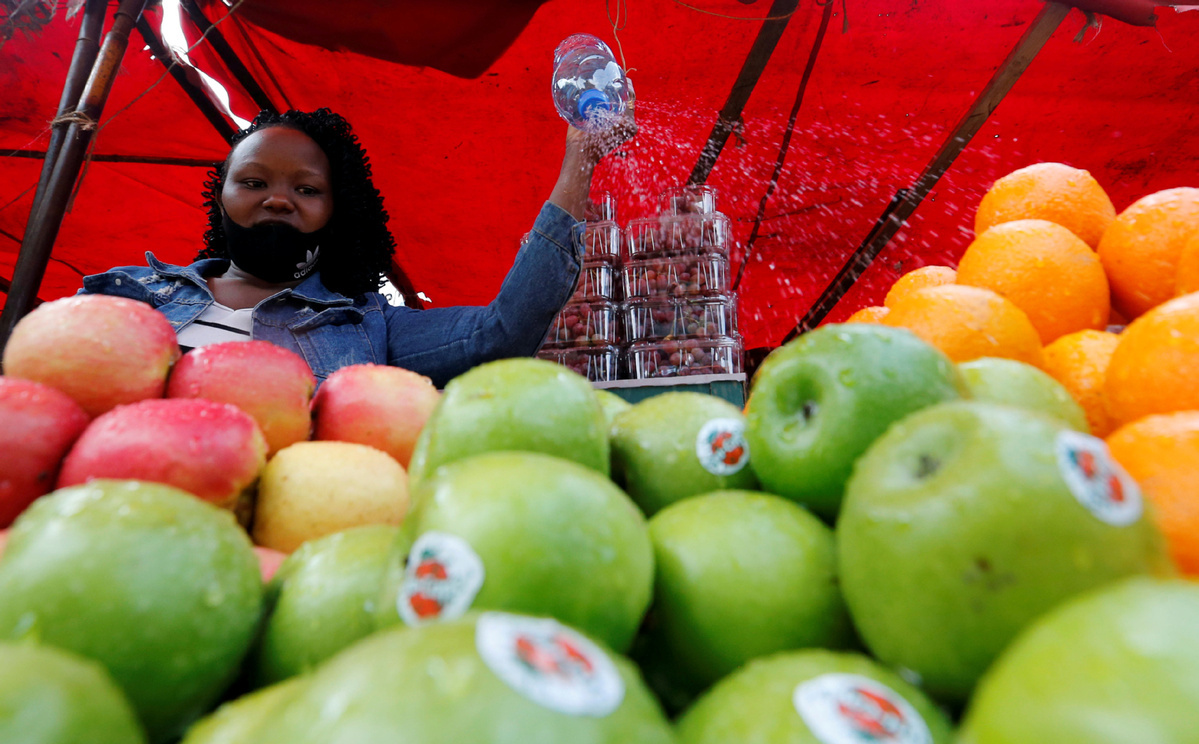 A trader waters fruits at her grocery stall in Eastleigh district of Nairobi, Kenya, on June 17, 2020. (File Photo: Agencies)

With novel coronavirus having thrown many African economies into a deep freeze, several governments are facing pressure to ease restrictions and reopen economies amid rapidly increasing cases of infections across the continent.

While many people, including experts, feel that countries should reopen their economies for the sake of the populations' livelihood, others worry that reopening could trigger a spike of infections or a fresh wave of the virus, consequently overwhelming the already weak healthcare system.

Mirriam Mbithe, an ice-cream vendor in Nairobi's Kibera slums, said her business has completely gone down, with her average daily returns sinking from $50 to zero. Students were her main clients.

The single mother of three has been struggling to put food on the table. However, the phased reopening of the economy announced by President Uhuru Kenyatta on June 6 has revived her hopes and she is eagerly waiting for the reopening of schools.

Michael Olusanya, the director of Greenway International Foundation, a Ghanaian based, youth-driven environmental protection organization, said the economy should be reopened for businesses to recover from the detrimental impact of the pandemic.

"The reopening of the economy will improve cash flow and mental health, as well as provide new opportunities for individuals and businesses," he said.

Olusanya said movement restriction has placed a huge limitation on individual lives and businesses, which in turn is affecting the country's economy.

"For almost two weeks, I'm still waiting for luggage I sent through a courier service that would normally have taken two days within the Economic Community of West African States region," he said.

Nicholas Tonderayi, a journalist based in Zimbabwe's capital, Harare, said reopening economies would be a positive move for many who have been struggling to earn an income.

However, he said reopening the economy now would be dangerous because cases are spiking.

"Personally, I have not been affected by the movement restrictions because media is classified as an essential service. In fact, I have earned more income under coronavirus lockdown than I had when things were normal," Tonderayi said.

The World Health Organization has already cautioned African countries against relaxing lockdown measures too quickly, saying the move could lead to a rapid increase of coronavirus cases.

According to Cavince Adhere, a Kenyan doctoral student in international relations at Central China Normal University, the challenge in reopening to many governments now is to try and balance between health needs and the economic viability of their population.

"The most pressing need is to try and have economic policies that work for the millions of Africans," Adhere said.

"The important thing is to understand the behavior of the pandemic. Each country should have confidence in the capacity to control the spread of the virus and have the mechanism of ensuring that economies are reopened in a safer, progressive and more sustainable way, rather than exposing populations to the virus again," Adhere said.

He said reopening is dependant on the capacity of the government to put in place a mechanism that can ensure the population is kept safe from the virus.

Mike Ngunyi, a disability inclusion expert with the Kenya Union of the Blind, said African countries have different social and economic makeups, hence the reopening of economies cannot be uniform.

North African countries for example, he said, have well-developed economies that support their governments in essential public services, such as healthcare, education and social protection, for the most vulnerable in their communities.

They also have larger aging populations who have underlying conditions. As such, reopening the economies in these countries largely depends on whether they have completely flattened the curve.

Ngunyi said in Sub-Sahara African countries, economies are so weak that the governments are unable to even provide basic services, such as piped water, quality public healthcare and public education.

"Because of weak economies to support government delivery of public services, most of the countries in the region would not be able to sustain the lockdown for more than 100 days without the real risk of total collapse of the economic and social systems," he said.

Ngunyi said healthcare in most of Sub-Sahara African countries is financed through out-of-pocket payments in a private health care system due to the absence of robust accessible public health care. Extension of the lockdown means people are unable to afford healthcare due to job loss and this could result in people dying from treatable diseases at home.

"As African countries prepare to reopen their economies, they must develop new methods of forestalling deaths from the virus. Countries in Sub-Sahara Africa must find ways of protecting the most vulnerable populations from the virus," Ngunyi said.

"Governments should identify the most vulnerable people and send them to voluntary isolation with all necessary support," he added.