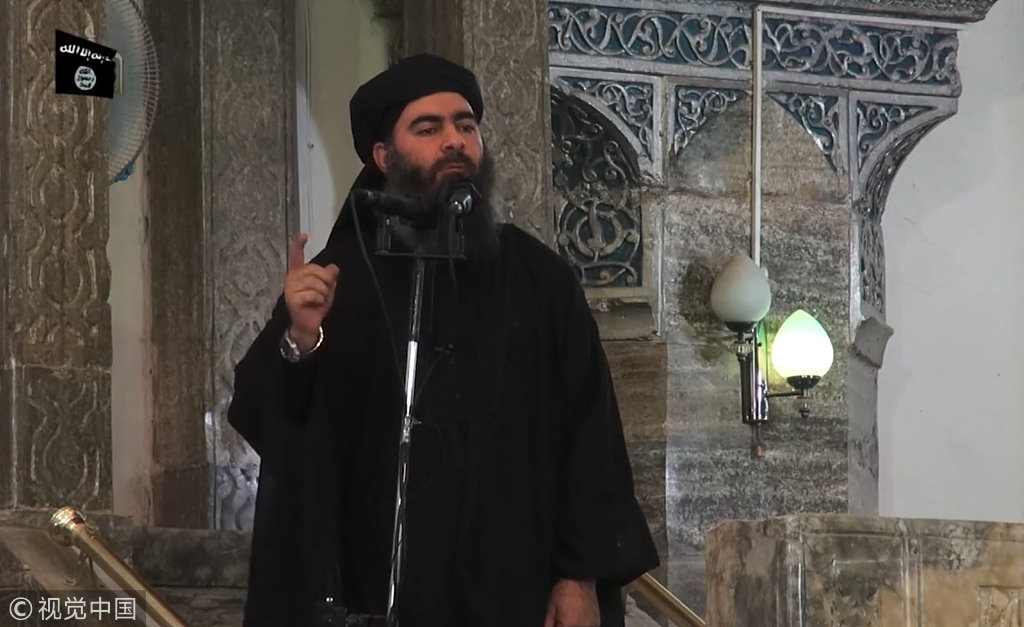 This July 5, 2014 photo shows an image grab taken from a propaganda video released by al-Furqan Media allegedly showing the leader of the Islamic State (IS) jihadist group, Abu Bakr al-Baghdadi, aka Caliph Ibrahim, adressing Muslim worshippers at a mosque in the militant-held northern Iraqi city of Mosul.  (Photo: VCG)

The Islamic State group says the son of its leader has been killed fighting Syrian government forces.

The announcement of the death of the young son of Abu Bakr al-Baghdadi appeared on the group's social media accounts late Tuesday. It included a picture of a young boy carrying a rifle and identified him as Huthaifa al-Badri.

The statement, dated this month, said he was an elite fighter, known as an "inghimasi," who was killed while fighting Syrian and Russia troops at a power station in the central Homs province. It did not specify when he was killed.

The Syrian Observatory for Human Rights, a war monitoring group, said the most recent IS operations in the area were in the first two weeks of June.

Al-Baghdadi has been reported killed or wounded on a number of occasions but is widely believed to still be alive. Little is known about al-Baghdadi's family, but a woman and a child who were said to be his wife and daughter were detained in Lebanon in 2014.

IS has been driven from nearly all the territory it once controlled in Syria and Iraq, though it still maintains a presence in the Syrian desert and remote areas along the border.

The Observatory said late Tuesday that one of the group's last pockets in the eastern Syrian province of Deir el-Zour came under intense shelling from the U.S-led coalition. At least 12 militants are believed to have been killed in Hajin, the Observatory said.