WORLD IS leader's death ushers in new phase for the group

IS leader's death ushers in new phase for the group 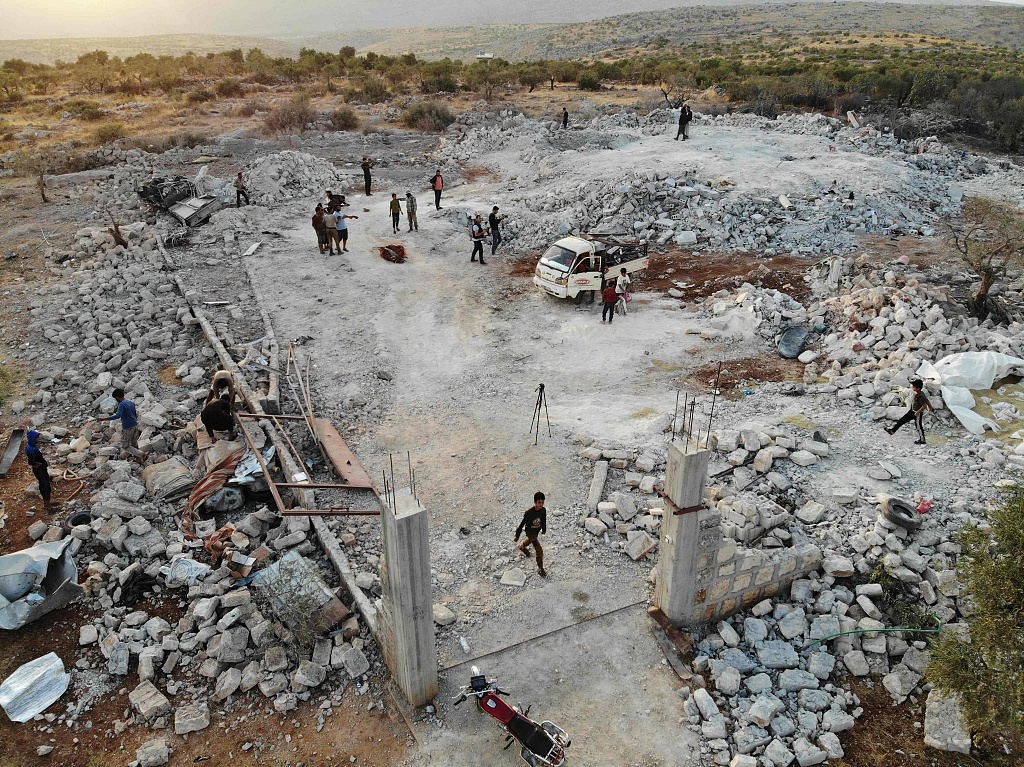 An aerial view taken on on October 27, 2019 shows the site that was hit by helicopter gunfire which reportedly killed nine people near the northwestern Syrian village of Barisha in the Idlib province along the border with Turkey, where "groups linked to the Islamic State (IS) group" were present, according to a Britain-based war monitor with sources inside Syria. (Photo: VCG)

One of Abu Bakr al-Baghdadi's last audio messages was an appeal for his followers to do everything in their power to free Islamic State detainees and the women being held in jails and camps in northeastern Syria.

With news of the extremist group's leader's death, Kurdish security forces worried about the possibility of attacks or rioting have been tightening security at these facilities, which hold more than 80,000 members and supporters of the militant group, including women and children.

Fear of chaos already was running high over the fate of those detained after this month's Turkish military invasion of northeastern Syria, which ushered in major troop changes in the area about two weeks after al-Baghdadi's message. Kurdish officials said they needed to divert fighters and logistics to the front line to ward off the Turkish offensive. Turkey moved troops into areas along the border, while Syrian border guards were deployed in others.

A shaky cease-fire is in place and an agreement to redeploy Kurdish forces away from the borders.

While news of al-Baghdadi's death had not been announced in the camps on Monday, many of his supporters living in detention facilities and camps in Syria have telephones and they most likely heard the news.

"If our men are in prison, we are the soldiers of the Caliphate," some of the women held in al-Hol, the largest holding camp in northern Syria chanted Monday, according to a security official with the Kurdish-led internal security agency. The official wasn't authorized to talk to journalists and spoke anonymously.

The camp is home to 70,000, most of them women and children including about 11,000 foreigners. More than 10,000 prisoners, including 2,000 foreigners, are in detention facilities in northeastern Syria.

The nighttime raid by U.S. special operations forces was a blow to the militant group that became a global organization under his leadership. His demise only few months after losing the group's territorial hold ushers in a new phase for IS amid uncertainty over the new leadership as thousands of its supporters and members languish in prisons.

The decentralized group, with members estimated anywhere between 14,000 or 30,000, has already pivoted toward insurgency after losing its territory in the last couple of years. But its branches abroad and the number of those who pledged their allegiance have increased.

Who the next leader is will likely determine whether the group will dig in to consolidate its hold on Syria and Iraq — or focus on global outreach.

The group has not officially announced al-Baghdadi's death or named a new leader. In public, followers and supporters have not eulogized the 48-year old. But social media posts by groups affiliated with IS note that the death of a leader doesn't spell the end of an ideology.

"Jihad has not stopped with the death of a leader or Emir," said a post on Shmoukh al-Islam page, or glory of Islam. It added: "What if the leader of the Believers is martyred, we will stay the course and to whoever follows we renew the pledge."

Experts and security officials say one of al-Baghdadi's close aides will likely succeed him. But the shadowy head of IS was security-obsessed and known for turning on members of his close circle. One possible favorite is Abdullah Qardash, an Iraqi Turkman from Talafar and a former officer in Saddam Hussein's army. The two met in a U.S. prison in 2003 and Qardash became al-Baghdadi's top security henchman.

The IS Shura council, the shadowy group's leadership of 10 or so people, is supposed to choose the next leader if al-Baghdadi had designated a successor. But it's not clear how many of them are still alive.

Another of al-Baghdadi's close aides, Abu Hassan al-Muhajir, was killed in a joint U.S. operation with Kurdish forces in Jarablus on Sunday, hours after al-Baghdadi blew himself up during a U.S. raid. Little is known about al-Muhajir, who was appointed spokesman in 2016 and is believed to be a foreigner given his nom de guerre, the migrant.

Syrian Kurdish forces spokesman Mustafa Bali said his fighters believe al-Muhajir was in Jarablus to facilitate al-Baghdadi's travel to the area, which is administered by Turkey-backed fighters.

The new leader's priority, experts say, will likely be prison breaks. The group's previous incarnation organized some of the most spectacular prison escapes in Iraq in a year-long operation called "Breaking the Walls." It was responsible for at least eight different prison breaks, freeing nearly 500 people between 2012 and 2013.

"It has almost always been a priority (for the group), the question is whether it'll be able to pull it off, " said Hassan Hassan, an IS expert and an analyst at the Center for Global Policy.

Forces from the Kurdish-led internal security agency were "on high alert" in anticipation of possible riots in the camps, attacks on the prisons and an increase in "revenge attacks" in northeastern Syria where most of the group's members and supporters are, the official with the agency said.

Kurdish officials said there have seen an uptick in IS activities in recent weeks, attacking checkpoints and patrols with roadside and remotely detonated bombs.

Jennifer Cafarella, a Syria expert with the DC-based Institute for the Study of War, said it wasn't yet clear whether IS would pick an Iraqi leader.

"ISIS has become a global organization and if it hopes to remain so, it will need a leader that can convincingly fill the role of an international commander and cleric. ISIS's Iraqi heritage could actually become a liability for the organization," she said using another acronym for IS.

Hassan said the organization will probably pick an Iraqi as the majority of its members are from Iraq and given the group's focus on religious and operational credentials.

He added: Whoever "he is, he'll have to start from scratch. To build his legacy and prove himself."