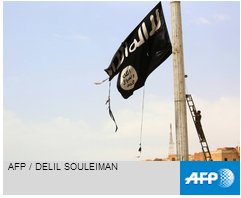 he Islamic State group recaptured Albu Kamal in eastern Syria on Saturday after a fierce fightback to save the last urban bastion of its collapsing "caliphate".

The jihadist rebound came as the United States and Russia issued a surprise joint presidential statement saying there was "no military solution" to Syria's grinding six-year war.

The two countries have long backed opposite sides in Syria, but the Kremlin on Saturday said US President Donald Trump and Russian counterpart Vladimir Putin made progress during a brief meeting on the sidelines of a summit in Vietnam.

Trump and Putin also "confirmed their determination to defeat ISIS", an alternative name for IS.

The jihadist group overran swathes of territory in Syria and Iraq in 2014, but its self-styled "caliphate" has since been whittled down to a pocket of land along the border between the two countries.

IS is putting up a fierce defence there, particularly for the vital Syrian border town of Albu Kamal, said the Syrian Observatory for Human Rights monitoring group. 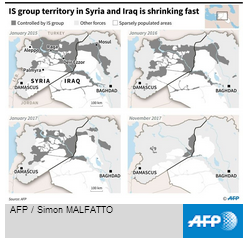 Syrian regime forces and allied militia from Lebanon, Iraq and Iran overran Albu Kamal on Thursday but lost the town again just two days later after a string of IS counter-attacks and ambushes.

"IS fully recaptured Albu Kamal, and regime forces and allied militia are now between one to two kilometres from the city limits," Rami Abdel Rahman, head of the Britain-based Observatory, said on Saturday.

The Observatory also reported 26 civilians killed, including nine children, since Friday night in artillery fire by regime forces and Russian air strikes that hit villages and camps for those displaced by the fighting in Albu Kamal.

Across the border, Iraqi forces seized on Saturday several villages from the jihadists in an offensive to capture the last IS-held section of their country. 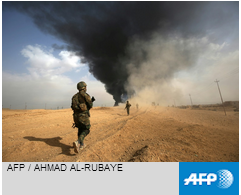 Iraqi forces and members of the Hashed al-Shaabi (Popular Mobilisation units) advance towards the city of Al-Qaim near the Syrian border as they battle jihadist holdouts on November 3, 2017

The operation's commander, General Abdelamir Yarallah, said his forces captured Rumana and 10 other villages as they worked their way towards the Euphrates Valley town of Rawa, the last Iraqi town still held by IS.

The jihadist group has in the space of a few weeks seen its "caliphate" shrink to a small rump and lost major cities such as Mosul in Iraq, and Raqa and Deir Ezzor in Syria.

Albu Kamal is the last significant Syrian town it controls. Losing it would cap the group's reversion to an underground guerrilla organisation with no urban base.

IS rose to prominence in the chaos of Syria's conflict, which broke out in 2011 with protests against President Bashar al-Assad.

It has since evolved into a complex war that has killed more than 330,000 people, forced millions more to flee, and left much of the country in ruins.

Violence has broadly decreased since a series of "de-escalation zones" have been put in place in recent months in battlefronts across the country.

On Saturday, Jordan announced it had agreed with the United States and Russia to formally establish such a zone in southern Syria to build on a ceasefire already in place there.

Multiple rounds of peace talks hosted by the United Nations in Geneva have failed to resolve Syria's entrenched conflict.

Saturday's joint statement from the US and Russian presidents urged Syria's warring sides to take part in a new round of talks later this month in Switzerland.

"What the joint statement indicates is a commitment to get this to a political reconciliation and peace process. That serves their interest, it serves our interest," a senior US State Department official said Saturday.

The official said it was likely that Syria's post-conflict political system would be "a power-sharing arrangement just like we ended up with in Iraq".

The official expected that future parliamentary and presidential elections would see the Syrian people "decide they want different leadership".

Assad would be allowed to go "wherever he would like to go. Unless he's under war crimes investigations", the official said.