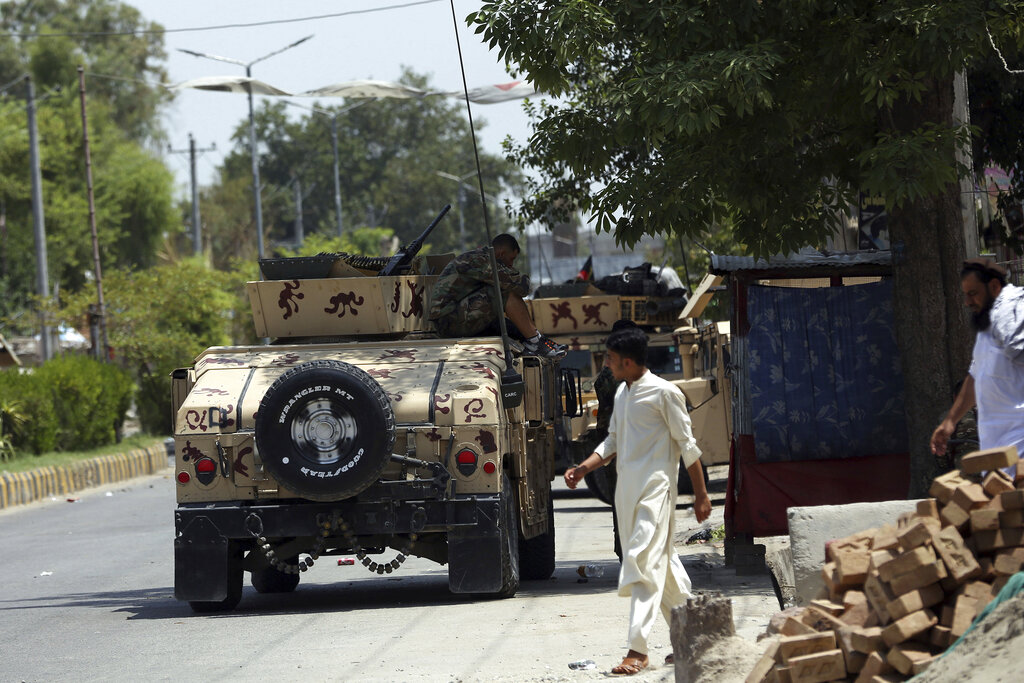 Afghan security personnel gather in front of a prison after an attack in the city of Jalalabad, east of Kabul, Afghanistan, Monday, Aug. 3, 2020. An Islamic State group attack on the prison in eastern Afghanistan holding hundreds of its members raged on Monday after killing people in fighting overnight, a local official said. (Photo: AP)

An Islamic State group attack on a prison in eastern Afghanistan holding hundreds of its members raged on Monday after killing at least 21 people in fighting overnight, a local official said.

Another 43 people have been wounded in the assault that began late Sunday when an Islamic State suicide bomber slammed his explosive-laden vehicle into the Jalalabad prison's entrance.

Militants then opened fire on security forces at the prison in the capital of Nangarhar province, some 115 kilometers (70 miles) east of Kabul.

Three attackers have been killed so far but the battle continued Monday with sporadic gunfire still coming from the prison grounds, said Attaullah Khogyani, a spokesman for the governor of Nangarhar province.

Police believe several militants slipped away into a nearby residential complex, making it more difficult to flush them out, authorities said.

Afghan Security and Defense Force personnel in armored vehicles surrounded the prison in the middle of Jalalabad, just 700 meters (half a mile) from the governor's office. Soldiers were still evacuating residents from the area on Monday as sporadic gunshots rang out.

The Islamic State group's affiliate in Afghanistan, known as IS in Khorasan province, has claimed responsibility for the attack. The affiliate is headquartered in Nangarhar province.

The motive of the attack wasn't immediately clear. However, some prisoners have escaped during the fighting, said another provincial official, who spoke on condition of anonymity because he was not authorized to speak to journalists.

The prison houses about 1,500 inmates, of which several hundred are believed to be Islamic State members.

While the Islamic State group has seen its so-called caliphate stretching across Iraq and Syria eliminated after a yearslong campaign, the group has continued fighting in Afghanistan. The extremists also have battled the Taliban in the country, whom the U.S. overthrew following the 2001 American-led invasion after the Sept. 11 attacks.

The Taliban’s political spokesman, Suhail Shaheen, told The Associated Press that his group was not involved in the Jalalabad attack. The U.S. struck a peace deal with the Taliban in February. A second, crucial round of negotiations between the Taliban and the political leadership in Kabul has yet to start. Still, Washington and NATO already have begun withdrawing troops in line with the deal.

“We have a cease-fire and are not involved in any of these attacks anywhere in the country,” he said.

The Taliban declared a three-day cease-fire starting Friday for the major Muslim holiday of Eid al-Adha. The cease-fire expired at 12 a.m. Monday though it wasn't immediately clear if it would be extended as the U.S. pushes for an early start to intra-Afghan negotiations that have repeatedly been delayed since Washington signed a peace deal with the Taliban in February.

The Taliban also had denied being involved in a suicide bombing in eastern Logar province late Thursday that killed at least nine people and wounded 40.

Afghanistan has seen a recent spike in violence, with most attacks claimed by the local Islamic State group affiliate.