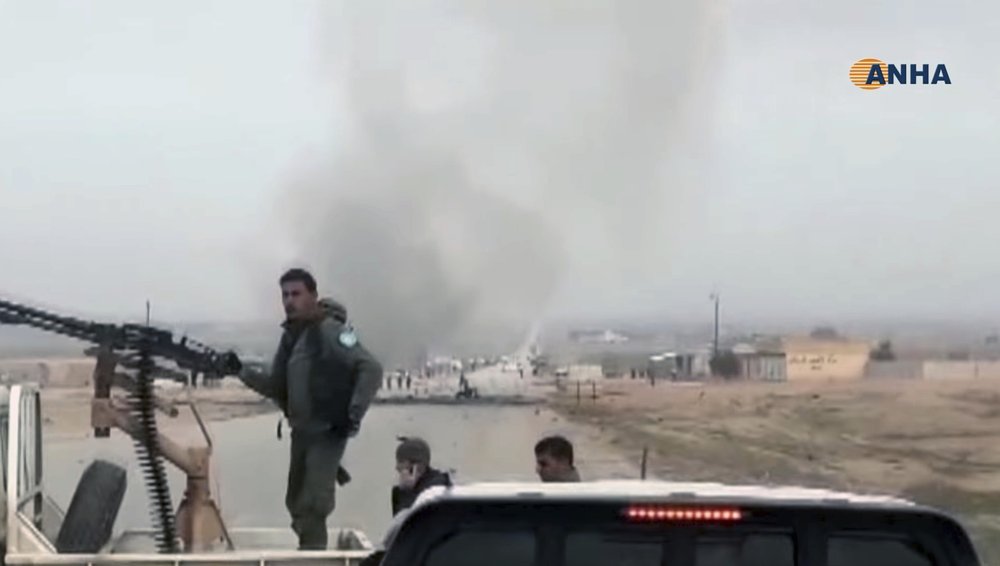 This frame grab from video provided by Hawar News, ANHA, the news agency for the semi-autonomous Kurdish areas in Syria, shows Kurdish fighters standing guard at the site of a suicide attack near the town of Shaddadeh, in Syria's northeastern province of Hassakeh, Syria, Monday, Jan. 21, 2019. The state news agency SANA and the Kurdish Hawar news agency, said that the blast was a suicide bombing that targeted a Syrian Kurdish checkpoint. (Photo:  AP)

An Islamic State suicide bomber targeted a joint convoy of U.S. and allied Kurdish forces in northern Syria on Monday, marking the second attack against U.S. troops in less than a week and further highlighting the dangers surrounding U.S. plans to withdraw forces after a declaration that the extremist group had been defeated.

The attack happened on a checkpoint on the edge of the town of Shaddadeh in the Hassakeh province, on a road used by local Kurdish fighters and the U.S.-led coalition fighting IS militants near the Iraqi border.

U.S. military Col. Sean Ryan said there were no casualties among the U.S.-led coalition members. “We can confirm a combined U.S. and Syrian partner force convoy was involved” in the suicide bomb attack, he said.

“We will continue to review the situation and provide updates as appropriate,” he added.

Monday’s bombing came days after a suicide attack killed 19 people, including two U.S. service members and two American civilians, in the northern Syrian town of Manbij. That bombing, outside a popular restaurant frequented by American troops, was the deadliest assault on U.S. troops in Syria since American forces moved into the country in 2015.

The extremist group claimed both attacks in statements carried by its Aamaq news agency. IS has been driven from virtually all the territory it once held in Syria and Iraq but continues to carry out attacks in both countries.

The Kurdish Hawar news agency, based in northern Syria, said Monday’s blast targeted a Syrian Kurdish checkpoint as a coalition convoy was passing near Shaddadeh. It said two Kurdish fighters were lightly wounded in the blast.

The Observatory said the blast killed five people and wounded others.

In a Dec. 19 tweet announcing the withdrawal from Syria, President Donald Trump declared, “We have defeated ISIS in Syria, my only reason for being there during the Trump Presidency.” He said the troops would begin coming home “now.” That plan triggered immediate pushback from military leaders and led to the resignation of Defense Secretary Jim Mattis.

Over the past month, Trump and others have appeared to adjust the timeline, and U.S. officials have suggested it will likely take several months to safely withdraw the approximately 2,000 U.S. troops from Syria.

Sen. Lindsey Graham, a leading voice on foreign policy and close ally of the president, said during a visit Saturday to Turkey that an American withdrawal from Syria that had not been thought through would lead to “chaos” and “an Iraq on steroids.” Graham urged Trump not to get out without a plan and said IS has not yet been destroyed in Syria.

The office of Turkish President Recep Tayyip Erdogan said he and Trump spoke by phone early Monday about Manbij, and that Erdogan told Trump that Turkey is “ready to take over the security” of the town “without losing time.”

The fate of the Syrian town, controlled by U.S.-backed Syrian Kurdish fighters whom Turkey considers terrorists, has been a source of tension between Ankara and Washington. Turkey insists on the withdrawal of the Syrian Kurdish militia, which drove IS from Manbij in 2016.

Erdogan called last week’s suicide attack in Manbij a “provocation meant to affect the U.S. decision to withdraw from Syria,” and said the two leaders agreed their military chiefs would “speed up” consultations about a safe zone in northeastern Syria.

In a separate development on Monday, the European Union added 11 businessmen and five companies to its list of Syrians under sanctions for backing President Bashar Assad’s government.

EU foreign ministers imposed travel bans and asset freezes on them, saying they “are involved in luxury estate development and other regime-backed projects, and as such support and/or benefit from the Syrian regime.”

The EU sanctions list now includes 270 people and 72 “entities,” which are usually companies, organizations or agencies.

The EU began imposing sanctions on Assad and his supporters in 2011, after peaceful protests erupted against his family’s decades-long rule and the government launched a violent crackdown. The sanctions are reviewed every year.

The measures include an oil embargo, investment restrictions, a freeze on Syrian central bank assets held in the EU, and export bans on equipment that could be used to crack down on civilians.