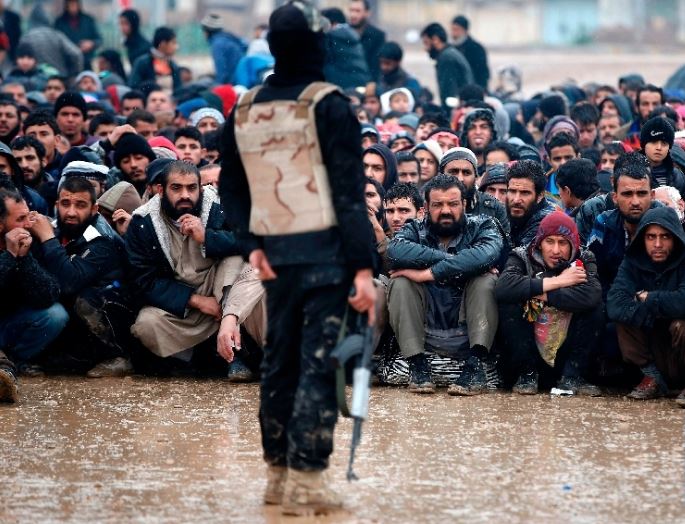 Iraqi civilians fleeing the city of Mosul sit under the rain on March 23, 2017 as Iraqi forces advance in their massive operation to retake Iraq's second city from jihadists of the Islamic State group. (Photo: AFP)

UNITED NATIONS, Aug. 23 (Xinhua) -- The Islamic State (IS) remains a cause of a serious and significant concern despite the great losses the terrorist group has suffered, said Vladimir Voronkov, undersecretary-general for UN Counter-Terrorism Office, on Thursday.

Since the end of 2017, the IS has been defeated in Iraq and is in headlong retreat in Syria, Voronkov told the Security Council.

IS membership in Iraq and Syria is estimated at more than 20,000, split fairly evenly between the two countries. Some IS fighters are fully engaged militarily and others concealed in sympathetic communities and urban areas. The IS has also decentralized its leadership structure to mitigate further losses, said the top UN counter-terrorism official, briefing the council on a report of the UN secretary-general on the IS.

An IS core is likely to survive in Iraq and Syria in the medium term, due to the ongoing conflict and complex stabilization challenges, he said. In addition, significant IS-affiliated numbers also exist in Afghanistan, Southeast Asia, West Africa and Libya, and to a lesser extent in Sinai, Yemen, Somalia and the Sahel.

The flow of foreign terrorist fighters toward the IS in Iraq and Syria has essentially come to a halt. However, the reverse flow, although slower than anticipated, remains a serious challenge, he said.

Moreover, the rising threat from the IS's global network, particularly from foreign terrorist fighters, will be diverse and hard to predict.

The IS's evolution from a proto-state structure into a covert network poses new challenges, he said.

The IS's finances in the Middle East are harder to detect and analyze now as administrative functions to manage finances have gone underground. After its structural changes, the IS is still able to channel funds across borders often via intermediate countries, to their final destination, he said.

The IS's continuing presence and influence has been detected, particularly through its affiliates and intermediaries, said the UN official.

The IS has continued attempts to expand its presence in Afghanistan, and the terrorist threats projecting from Afghanistan into Central Asia is perceived to be growing, he said.

Countries must renew their efforts to effectively counter the rapidly evolving and transnational threats from the IS, he said, adding that international cooperation, information sharing and capacity-building are critical.