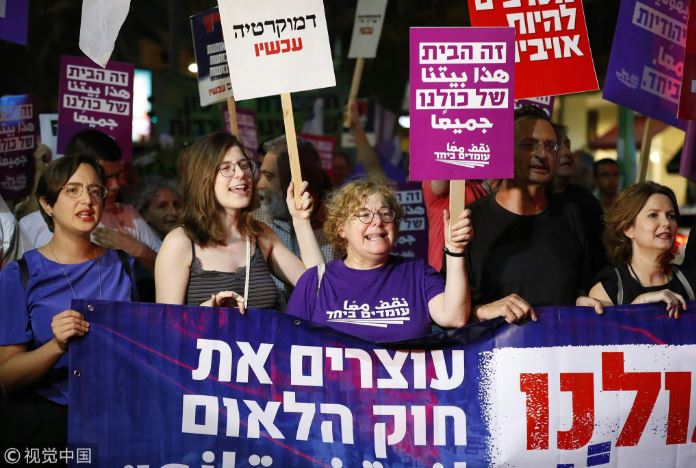 Israel's parliament on Thursday adopted a law defining the country as the nation state of the Jewish people, provoking fears it could lead to blatant discrimination against Arab citizens.

Arab lawmakers and Palestinians called the law "racist" and said it legalized "apartheid" following a tumultuous debate in parliament.

The legislation, adopted by 62 votes to 55, makes Hebrew the country's national language and defines the establishment of Jewish communities as being in the national interest.

The law, passed in the early hours of Thursday, speaks of Israel as the Jewish historical homeland and says Jews have the right to self-determination there.

The legislation becomes part of the country's basic laws, which serve as a de facto constitution.

"It is a decisive moment in the history of the state of Israel that inscribes in stone our language, our anthem and our flag," Israeli Prime Minister Benjamin Netanyahu said after the vote on the legislation, backed by his right-wing government.

A range of opposition politicians denounced the vote. The head of the mainly Arab Joint List alliance Ayman Odeh called it "the death of our democracy."

Arab parliament members who called the legislation "racist" ripped up copies of the bill in the chamber of the Knesset, Israel's parliament, after it was passed.

Arab citizens account for some 17.5 percent of Israel's almost nine million population. They have long complained of discrimination.

Saeb Erekat, secretary-general of the Palestine Liberation Organization, called it a "dangerous and racist law" that "officially legalizes apartheid and legally defines Israel as an apartheid system."