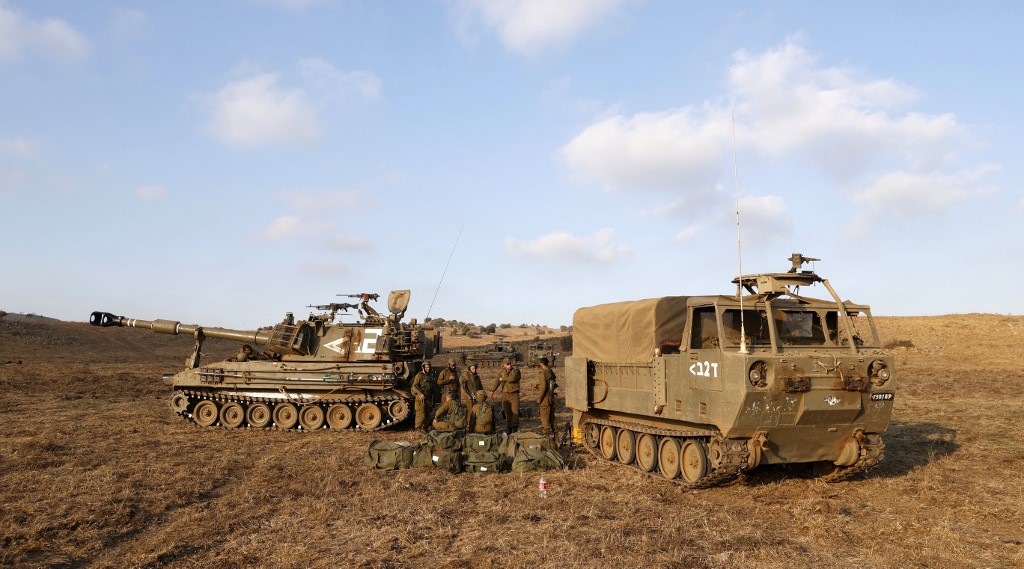 Israeli soldiers stand between a self-propelled artillery vehicle and an armoured personnel carrier (APC) during a military drill in the Israeli-annexed Golan Heights, near the border with Syria, on August 4, 2020. (Photo: AFP)

Israel launched air strikes on Syria Wednesday, killing three troops and hitting Iranian targets in what the Israeli army called a retaliatory attack after it found explosive devices along its northern border.

The targets included "storage facilities, headquarters and military compounds" as well as "Syrian surface-to-air missile batteries", according to an army statement.

Syrian state news agency SANA said the strikes killed three of its soldiers and injured another.

Israel has carried out hundreds of air and missile strikes on Syria since the civil war broke out in 2011, targeting Iranian and Lebanese Hezbollah forces as well as government troops.

The Jewish state rarely acknowledges individual strikes, but has done so when responding to what it describes as aggression inside Israeli territory.

On Tuesday, Israel's military said it had discovered improvised explosive devices (IEDs) on its side of a border crossing point with Syria.

Israel and Syria, neighbours still technically at war, have a border along the Golan Heights, which the Jewish State has occupied since the 1967 Six Day War.

According to the Israeli military statement, the IEDs "were placed by a Syrian squad led by Iranian forces."

Iran has been a key ally of Syrian President Bashar al-Assad's regime throughout the civil war that has killed more than 380,000 and erupted after the brutal repression of anti-government protests.

Israel's army said it "holds the Syrian regime responsible for all the actions perpetrated from its territory and will continue to operate as necessary against the Iranian entrenchment in Syria."

The air strikes came hours before US Secretary of State Mike Pompeo is to land in Israel for talks including on Iran, in what is likely to be his last visit to the staunch American ally before President Donald Trump leaves office.

Israel Prime Minister Benjamin Netanyahu, who called Trump his country's strongest-ever ally in the White House, has heaped praised on the administration for its hardline approach towards Iran.

Trump's so-called "maximum pressure" campaign against the Islamic Republic has included sanctions and scrapping of the nuclear deal agreed between Tehran and world powers during Barack Obama's presidency.