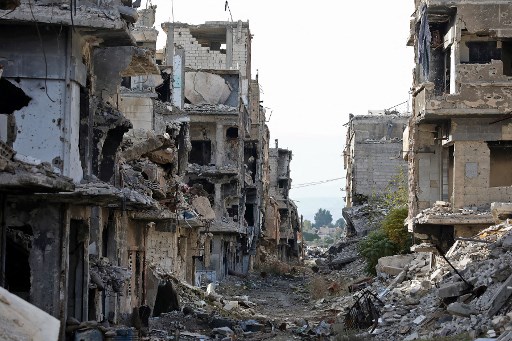 File photo: Destroyed buildings are pictured at the Palestinian Yarmuk camp, on the southern outskirts of the Syrian capital Damascus, on November 25, 2020 as families visit the destroyed residential district to inspect their abandoned apartments and register with the authorities with the hope of eventually returning to their homes. /AFP

The attack was launched from the Israeli-occupied Golan Heights, said the report, adding that the Syrian air defenses responded to the attack, intercepting most of the missiles.

Residents in the Syrian capital heard sounds of explosions, which later turned out the be the air defense missiles hitting the Israeli missiles in the sky.

It's the latest Israeli attack on the military positions near Damascus, where Israel suspects that the pro-Iran fighters are located.