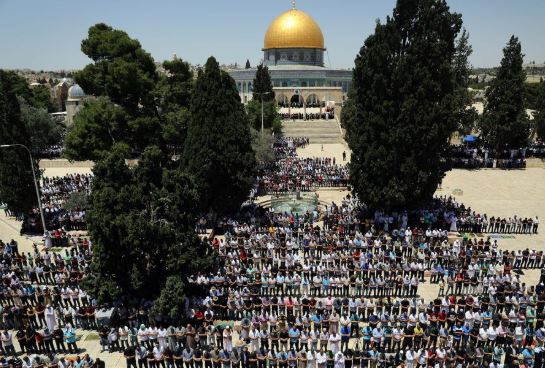 Muslim worshippers pray near the Dome of the Rock in Jerusalem's Al-Aqsa Mosque compound during the first Friday prayer of the Muslim holy month of Ramadan, on May 18, 2018. (Photo: Xinhua)

RAMALLAH, Nov. 23 (Xinhua) -- Palestinian sources said on Saturday that the Israeli forces have closed down Ibrahimi Mosque in the West Bank's southern city of Hebron, as thousands of Israeli settlers flock into the city to mark a Jewish holiday.

Hisham Sharabati, a member of Hebron Defense Committee, described the intensified Israeli restrictions as "an undeclared curfew," and a significant violation of the Palestinians' freedom of movement, religious and economic rights.

"The Israeli closure in the area would lead to serious losses for Palestinian merchants, because the city market is usually very busy on Saturdays, and it has caused an unbearable traffic jam," he told Xinhua.

Settlers have been flocking into Hebron since Friday evening to mark Chayei Sarah, or the life of Sarah holiday, this weekend and are expected to stay in the vicinity of the Mosque or the Cave of Patriarchs, which is a historical site believed to be the tomb of the prophet Abraham, his wife Sarah and his sons.

Ibrahimi Mosque, also known as Sanctuary of Abraham, is about 1,000 years old and is considered by Muslims the fourth holiest site, while Israelis believe the site is a shared faith site but has for a long time imposed restrictions on the access of Palestinians into the mosque.

In July 2018, the UNESCO declared the old city of Hebron an endangered site in an overwhelming vote, saying it is a Palestinian site that requires protection.

Following the signing of the Oslo agreement between the Palestine Liberation Organization and Israel in 1993, a subsequent agreement about Hebron was signed in 1997 splitting it into two sections; H1, which is under Palestinian control, and H2 under Israeli control.

Since then, tensions have been mounting between Palestinians and Israelis in the old city, leading to a sharp decline in the Palestinian population there and gradually killing the city's economic and touristic life.