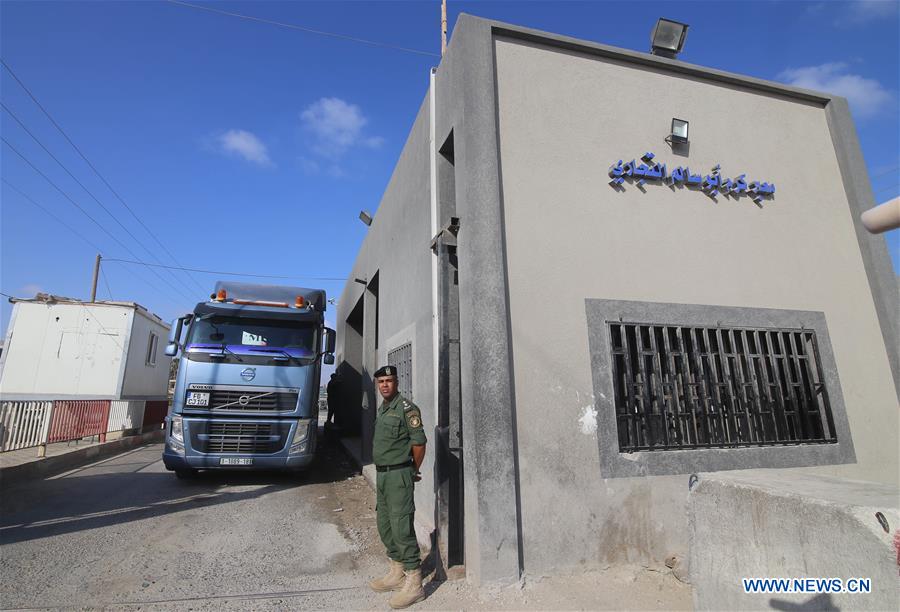 A member of Palestinian security force gestures as a truck arrives at the gate of the Kerem Shalom commercial crossing, the main passage point for goods entering Gaza, in the southern Gaza Strip city of Rafah, on Aug. 15, 2018. Israel eased Wednesday restrictions on border commercial crossing point and expanded fishing area in the sea of Gaza from three to nine nautical miles, officials said. (Photo: Xinhua)

Ra'ed Fattouh, Palestinian official in charge of coordinating the shipment of goods through the crossing of Kerem Shalom on the border between Israel and southeast Gaza Strip, told Xinhua that Israel will allow 700 trucks carrying construction materials, fuel, food, commercial and industrial products to pass through.

He also unveiled that the Israeli authorities will allow the shipment of other various kinds of products, which have been banned to the Gaza Strip since last September.

Israeli Defense Minister Avigdor Lieberman instructed more than one month ago to shut down Kerem Shalom commercial crossing for all kinds of products except the basic needs of food and medicine for more than 2 million Palestinians living in the Gaza Strip.

The Israeli decision to tighten its measures at the crossing points between the Hamas-ruled coastal enclave and Israel was made to put pressure on Hamas and other Palestinian activists to stop releasing arson kites and balloons into southern Israel, which caused severe damages.

Since March 30, Palestinians have organized weekly rallies and protests called the "Great March of Return," defying Israeli blockade. Medical sources said that the Israeli army have killed 169 Palestinians since then.

Jamal al-Khudari, an independent Palestinian lawmaker and chairman of the committee to defy the Israeli siege, said the Israeli decision of easing restrictions imposed on the Gaza Strip "is not enough."

Al-Khudari stated that around 95% of industries in the Gaza Strip had completely stopped after Israel banned raw materials for more than a month, causing severe damage to the weak economy there.

Egypt and United Nations Special envoy Nicolai Mladenov have been mediating a long-term truce between Israel and Gaza Hamas-led militant groups following weeks of military escalation between the two sides.