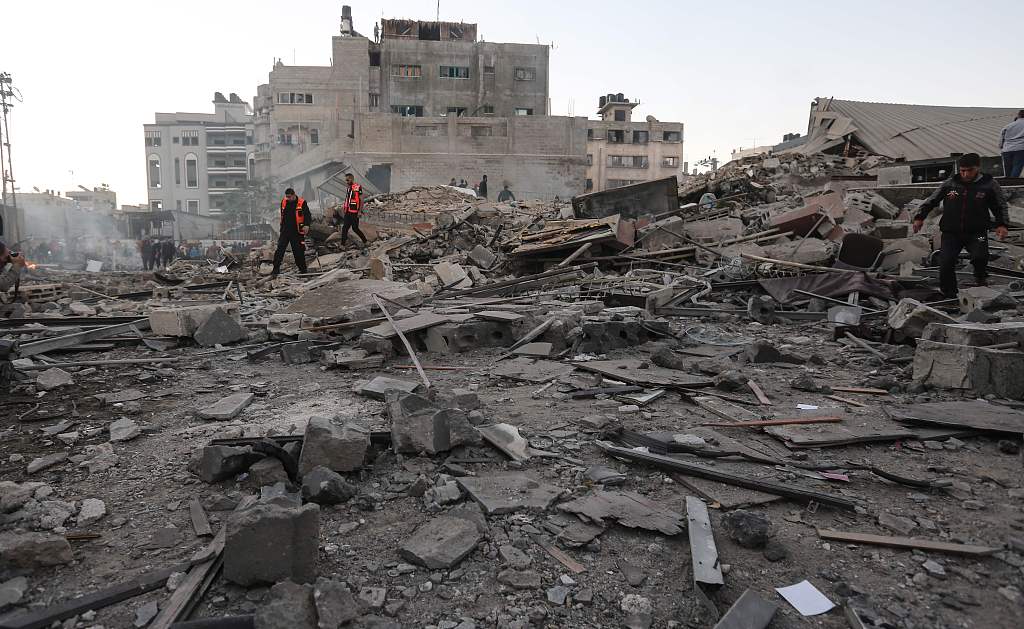 Members of the Palestinian civil defence search through the rubble of a building following an Israeli air strike on Gaza City on October 27, 2018. (File photo: VCG)

GAZA, Nov. 4 (Xinhua) -- The easement of Israeli restrictions on the Hamas-ruled Gaza Strip aims at preventing the explosion of the situation in the Palestinian enclave, according to Palestinian analysts.

In recent days, the 2 million population in Gaza have witnessed a significant improvement in power supplies after Israel allowed the shipment of the Qatar-funded industrial fuel for the operation of the sole power plant in the territory.

Israel also expanded the fishing area to nine nautical miles and improved the functioning of the border crossing points.

The analysts hoped that these steps, sponsored by Egypt and the United Nations, will strengthen the understandings between the Palestinian factions in Gaza and Israel over the possibility of a cease-fire.

"The indicators are positive in the calm talks, and the possibility of reaching a cease-fire agreement seems very close," said Mukhaimar Abu Saada, a Gaza-based political analyst.

However, the potential agreement "is limited to steps for humanitarian facilities without including a sea passage between the Gaza Strip and Cyprus," Saada told Xinhua.

On the ongoing Palestinian anti-Israel March of Return rally, the analyst said such steps can "ensure a reduction in violence on the border" despite the fact that they "do not guarantee a complete halt."

Borders between Gaza and Israel have been in tension since the start of protests on March 30, in which at least 220 Palestinians have been killed by Israeli gunfire and more than 22,000 others injured in confrontations occurring on an almost daily basis.

These protests demand to break the Israeli siege imposed on the Gaza Strip since after Hamas violently took over the coastal enclave in the summer of 2007 from fighting with forces loyal to the Palestinian Authority.

Hamas and other Palestinian factions announced, on many occasions, that the rallies will continue until the Israeli blockade is lifted.

Israeli Prime Minister Benjamin Netanyahu recently welcomed the mediation of the UN and Egypt to "prevent the collapse of the humanitarian situation in the Gaza Strip," according to Israeli media.

Adnan Abu Amer, a writer and political analyst from Gaza, said both the Palestinian factions and Israel are under more pressures to "strengthen their position between calm and possibilities of escalation."

Israel requires humanitarian steps toward the Gaza Strip to impose full calm, while the Palestinian factions calls for concrete steps to end or at least ease the siege of Gaza, Amer told Xinhua.

Israel's repeated demands of dismantling weapons of the Palestinian factions and hand over their soldiers are what hampered the settlement of the situation in the Gaza Strip, he noted.

Earlier this week, 34 homemade rockets were fired from the Gaza Strip into southern Israel. In response, the Israeli army raided 80 military targets belonging to Hamas and the Islamic Jihad movement in Gaza.

The last Egypt-brokered agreement signed between Fatah and Hamas was in October last year.

It provided for a handover of the Gaza Strip to the Palestinian consensus government, but failed because of differences between the two rivals on the implementation.

Recently, Mahmoud Abbas has threatened to take "crucial" decisions against the Gaza Strip, including a halt to his full funding in response to the continued internal division.

"Any steps to relax humanitarian facilities in Gaza without the approval of the Palestinian Authority perpetuate the internal division," Hani Hani al-Masri, a political analyst and writer from the West Bank told Xinhua.

"Hamas deals with the reconciliation file as an option, not as a priority. So it prefers to reach a unilateral truce before reconciliation and threatens to use rockets and marches to ensure the flow of fuel and national funds," Masri added.