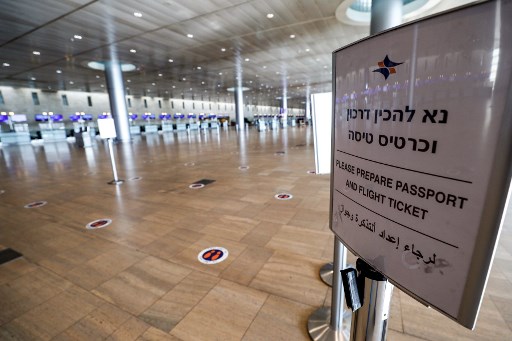 A sign stands instructing travellers to prepare their passports and flight tickets before checking in, at the deserted departure hall of Israel's Ben-Gurion International Airport in Lod, near Tel Aviv, on January 25, 2021. (Photo: AFP)

JERUSALEM, Jan. 26 (Xinhua) -- Israel early on Tuesday morning closed its international airport to all flights as a one-week measure to stop the arrival of new coronavirus strains came in effect.

The international Ben Gurion Airport outside Tel Aviv will remain closed until Jan. 31, when the ban is expected to be lifted, the Airport Authority said in a statement.

The measure bans all incoming and outgoing flights, except for medical emergencies and attending legal procedures or a funeral of a relative.

Prime Minister Benjamin Netanyahu told his weekly cabinet meeting on Sunday that the goal of the ban is to stop the arrival of new coronavirus variants and curb the outbreak in the country, according to a statement released by his office.

Some health officials said the ban might be extended. "Six days of airport closure will not suffice," Sharon Alroy-Preis, head of Public Health Services, told the parliament's Law and Justice Committee on Monday. She said the ministry wants to prevent the arrival of new variants before a large part of the population is vaccinated. The country began a large-scale vaccination drive to vaccinate most of its population on Dec. 20.

Israel has been under a third nationwide lockdown since Dec. 19, 2020, which is expected to be lifted on Jan. 31.