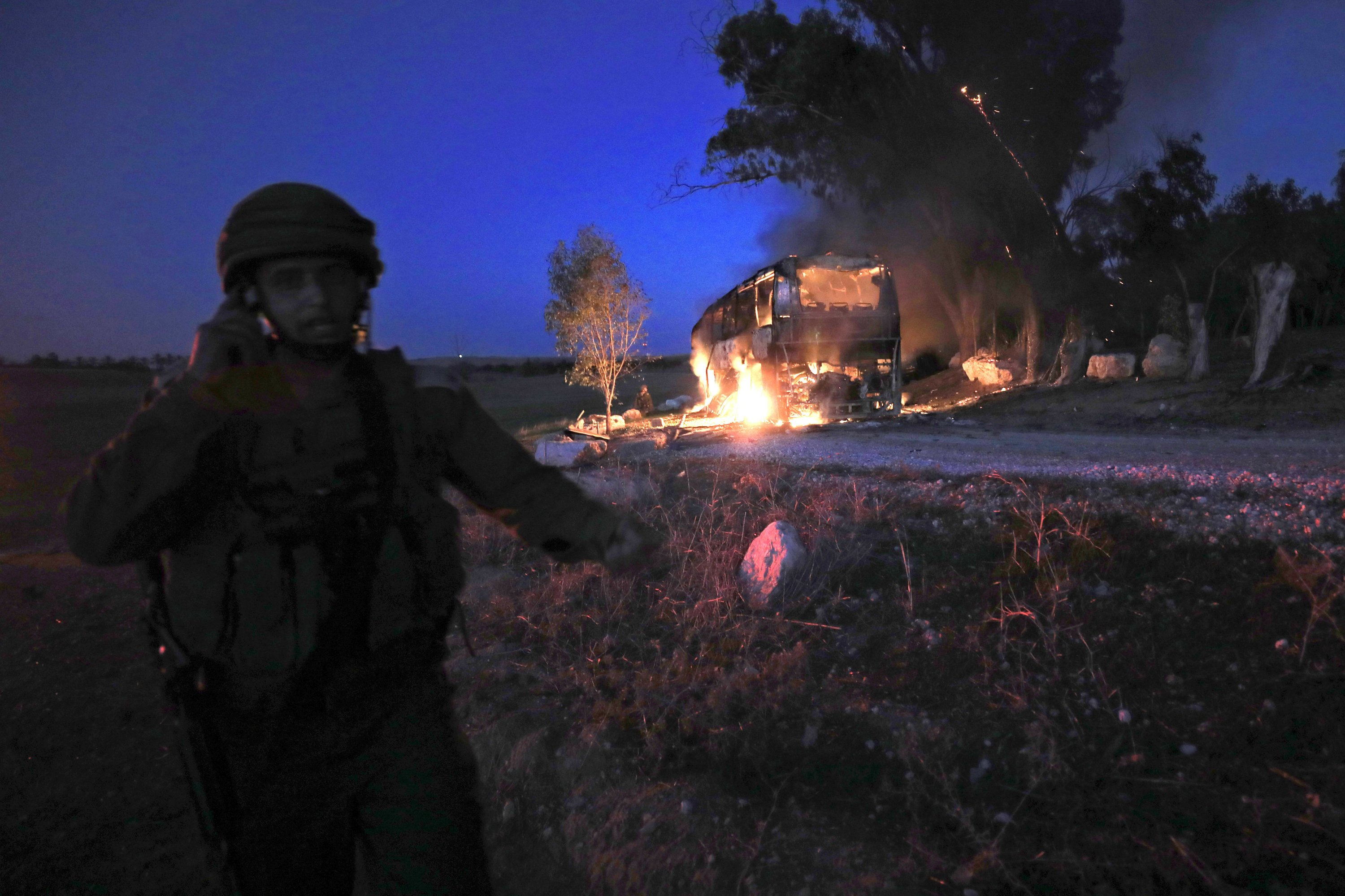 Palestinian militants bombarded Israel with dozens of rockets and mortar shells Monday while Israeli warplanes struck targets throughout the Gaza Strip in what appeared to be the most intense exchange of fire since the 2014 war.

The fighting, triggered by a botched undercover Israeli military raid in Gaza, cast doubt over recent understandings brokered by Egypt and U.N. officials to reduce tensions. Just a day earlier, Israel’s prime minister had said he was doing everything possible to avoid another war.

The undercover troops, apparently on a reconnaissance mission, were discovered several kilometers (miles) inside Gaza on Sunday, setting off a battle that left seven militants, including a Hamas commander, and an Israeli military officer dead.

Around sundown on Monday, militants launched some 100 rockets in less than an hour, the most intense barrage since the 50-day war four years ago.

The outgoing rockets, which continued into the evening, lit up the skies of Gaza and set off air raid sirens throughout southern Israel.

The military said warplanes, helicopters and tanks had struck over 30 militant targets, including military compounds, observation posts and weapons facilities. It also said it targeted a squad that was launching rockets.

“We continue to strike and retaliate against the military targets belonging to terrorist organizations in Gaza, and as for our intentions we will enhance these efforts as needed,” he told reporters.

Gaza’s ruling Hamas militant group and the smaller Islamic Jihad said the rocket fire was revenge for Sunday night’s Israeli incursion. Islamic Jihad spokesman Daoud Shehab said the groups wanted “the occupation and its supporters know that the lives of our sons come with a price.”

In all, some 200 rockets were fired into Israel by mid-evening, the army said. The Israeli military said it intercepted 60 rockets, and most of the others fell in open spaces. But rockets landed in the southern Israeli town of Sderot, setting off a large fire near a shopping center. Another rocket landed near a factory, and several homes were hit in southern towns.

The military said a bus traveling near the border was struck by an anti-tank missile, critically wounding a 19-year-old soldier. The strike set the bus on fire, sending a large plume of black smoke over the area. Conricus said others were injured in the attack, but he gave no further details.

Michael Oren, an Israeli Cabinet minister, said Israel “will do whatever it takes” to defend itself. “We expect the world to stand with us,” he said.

The EU’s ambassador to Israel, Emanuele Giaufret, called for a halt in “indiscriminate” rocket fire toward civilians. “Everyone must step back from the brink,” he said.

Hamas set up checkpoints across Gaza in a show of force. It also restricted movement through crossings with Israel, preventing foreign journalists, local businessmen and some aid workers from leaving the territory.

Hamas also canceled a weekly beach protest in northwestern Gaza along the border with Israel. The organizers cited “the ongoing security situation.”

Israel and Hamas have fought three wars since the Islamic militant group seized control of Gaza from the internationally-backed Palestinian Authority in 2007. In the most recent war, over 2,200 Palestinians were killed, more than half of them civilians, and tens of thousands were left homeless. Seventy-three people were killed on the Israeli side.

Israel and Egypt have maintained a blockade on Gaza since the Hamas takeover. The continued fighting, along with the blockade, have devastated Gaza’s economy. Unemployment is over 50 percent, the territory suffers from chronic power outages and most residents are unable to travel abroad.

For over seven months, Hamas has been leading protests along the Israeli border aimed in large part at breaking the blockade. More than 170 Palestinians, most unarmed, have been killed by Israeli fire during the protests. Israel says it is defending its border against militant infiltration attempts.

In recent weeks, Egyptian and U.N. mediators had appeared to make progress in brokering informal understandings aimed at quieting the situation.

Last week, Israel allowed Qatar to deliver $15 million to Gaza to allow cash-strapped Hamas to pay the salaries of thousands of government workers. At the same time, Hamas has lowered the intensity of the border protests in recent weeks.

The mediators hope to end the protests in exchange for an easing of the Israeli blockade. Those efforts were thrown into question by Monday’s fighting.

Israeli Prime Minister Benjamin Netanyahu cut short a visit to Paris because of the flare-up and returned to Israel on Monday for consultations with top security officials.

Israeli military spokesman Lt. Col. Jonathan Conricus said the operation was “not intended to kill or abduct terrorists but to strengthen Israeli security.” He said the force faced a “very complex battle” and was able to “ex-filtrate in its entirety.”

In a tweet after his arrival back home, Netanyahu praised the slain officer, whose identity was kept confidential for security reasons, and said “our forces acted courageously.” The officer’s funeral was held Monday.

On Sunday, Netanyahu defended his decision to allow through the Qatari cash to Gaza as a way to avert an “unnecessary war,” maintain quiet for residents of southern Israel and prevent a humanitarian catastrophe in the impoverished Gaza Strip.