President Donald Trump's recognition of Jerusalem as Israel's capital has set off an increasingly visible battle in the city's eastern sector — with an emboldened Israel seeking to cement its control over the contested area and Palestinians pushing back to maintain their limited foothold. 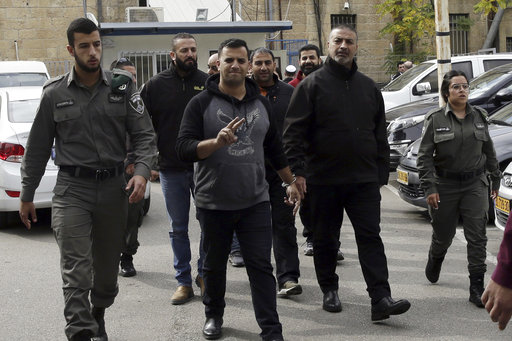 In this Monday, Nov. 26, 2018 photo, Palestinians accused of illegally working with Palestinian security services are brought to a court in Jerusalem. (File photo: AP)

In recent weeks, Israel has arrested dozens of Palestinian activists for alleged illegal political activity. It demolished Palestinian shops for failing to have permits, a court has cleared the way for settlers to move in to an Arab neighborhood and the city's outgoing mayor is trying to close the east Jerusalem operations of the U.N. agency for Palestinian refugees.

The Palestinian Authority in the West Bank, in turn, has boosted efforts to protect its claim on Jerusalem, attempting to block east Jerusalem Palestinians from selling properties to Jews — a major taboo that it is largely powerless to prevent.

"The change in the U.S. position on Jerusalem under Trump's administration has unleashed the Israeli hands to increase and escalate its measures that aim to change the features of the city from a Palestinian city to an Israeli one," said Walid Salem, a Palestinian analyst in Jerusalem. "The Palestinian Authority feels the heat and is stepping up measures to resist this Israeli policy."

The conflicting claims to east Jerusalem lie at the heart of the Israeli-Palestinian conflict. Israel captured the area, home to the city's most sensitive religious sites, in the 1967 Middle East war and annexed it, claiming the entire city as its capital. But the annexation is not internationally recognized, and the Palestinians seek east Jerusalem as the capital of a future state.

A year ago, Trump upended decades of American policy and recognized Jerusalem as Israel's capital.

"We finally acknowledge the obvious: that Jerusalem is Israel's capital," Trump said at the time.

Several months later, he moved the U.S. Embassy from Tel Aviv to Jerusalem, thrilling Israel and enraging the Palestinians.

Speaking at the embassy dedication ceremony in May, Netanyahu said: "We are in Jerusalem and we are here to stay."

Although Trump has said his decision would not determine the city's final borders, it has been seen by both Israel and the Palestinians as taking sides.

Israel's hawkish government has been energized by the backing of its American ally in its quest to keep Jerusalem what it considers to be its eternal, undivided capital.

The Palestinians have for years accused Israel of taking steps to fortify its hold on the city, primarily by encircling Arab neighborhoods in east Jerusalem with Jewish settlements. These settlements, considered by Israel to be neighborhoods of its capital, are now home to over 200,000 Israelis.

Criticism from previous U.S. administrations has often held Israel back in the past. With the reins removed, Israel has carried out a flurry of moves, often jostling with Palestinians along the way. 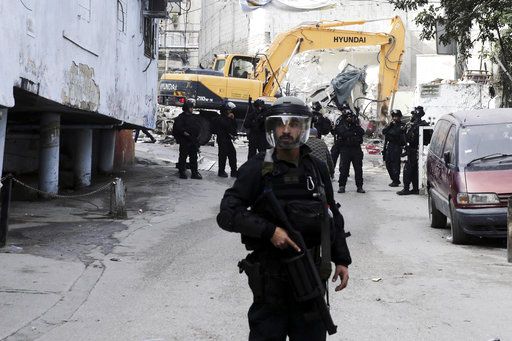 In this Wednesday, Nov. 21, 2018. photo, Israeli authorities destroy shops in the refugee camp of Shuafat in Jerusalem. (File photo: AP)

"Around 300, 000 Palestinian live in east Jerusalem," said Adnan Husseini, the Palestinian minister of Jerusalem affairs. "They have always resisted the Israeli occupation measures in the city and they always will."

In an unusual step, Israel arrested the top Palestinian official in Jerusalem this week along with over 30 Palestinian Jerusalemites, accusing them of the rarely enforced offense of serving in the Palestinian security forces in violation of previous agreements with Israel. Most were released on bail, but the governor, Adnan Ghaith, remains in custody.

The arrests appear to have been prompted by the detention of a Palestinian resident of east Jerusalem who allegedly sold property to Jews — a punishable offense under Palestinian law.

That detention was a bold move by the Palestinians because, also according to previous accords, they cannot arrest Jerusalem residents.

The Palestinians have also zeroed in on the Bedouin hamlet of Khan al-Ahmar. Israel says the West Bank encampment, just outside of Jerusalem, was illegally built and is trying to uproot the village. A planned demolition was postponed following heavy European pressure, but it could still happen at any time.

Critics say the demolition is meant to make way for Israeli settlement homes, a step the Palestinians fear could cut off the West Bank from their hoped-for capital in east Jerusalem.

While Khan al-Ahmar residents avoided eviction for now, others haven't. After a lengthy legal battle, Israel's Supreme Court this month rejected an appeal by residents of the Silwan neighborhood in east Jerusalem who claimed their land was illegally granted to a pro-settler group. The decision could lead to the evictions of hundreds of longtime Palestinian residents.

"A huge mechanism of displacement has been set in motion, allowing settlers and the government to work hand in hand," said Yudith Oppenheimer, executive director of Ir Amim, an Israeli advocacy group that promotes coexistence in the city.

Israeli police demolished 18 stores in east Jerusalem last week in what it called a "large-scale" operation against illegal structures that it said was prompted by Palestinian residents' complaints.

Meanwhile, in a move coordinated with the national government, Jerusalem's municipality plans to evict the U.N. agency responsible for Palestinian refugees and shift its services — schools, sanitation and others — over to Israeli authorities.

Jerusalem's outgoing mayor, Nir Barkat, said a decision by the Trump administration to cut $300 million in funding to UNRWA prompted the move.

The Israeli steps in east Jerusalem come ahead of the promised release of Trump's long-awaited peace plan. The Palestinians have already said they will oppose it, accusing Trump of being unfairly biased in favor of Israel.

Yitzhak Reiter, a senior fellow at the Jerusalem Institute for Policy Research, said Israel may be trying to skew the American plan toward its vision for the city.

"It seems that this plan will not completely satisfy Israel, let alone the Palestinians," Reiter said. "The Israeli government is making an attempt to create facts on the ground that will manifest its ideal plans and policies."