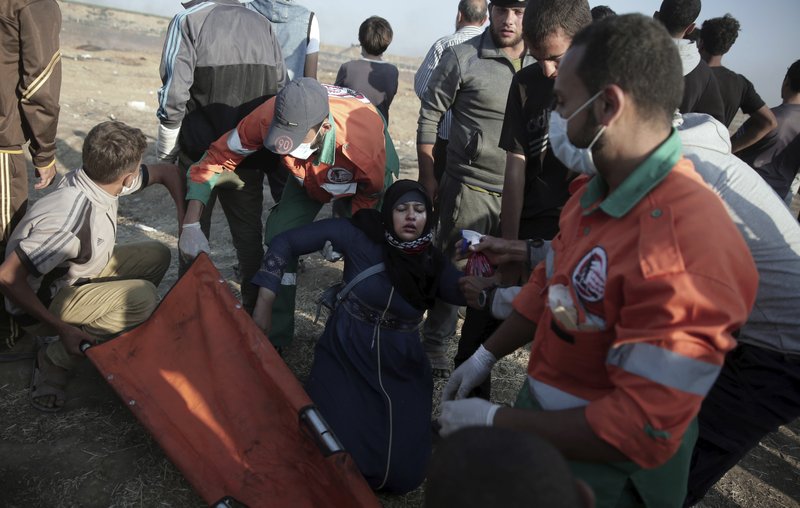 Palestinian medics help a woman who fainted from teargas fired by Israeli troops during a protest at the Gaza Strip's border with Israel, Tuesday, May 15, 2018. (File Photo: AP)

Israel's Prime Minister Benjamin Netanyahu said on Sunday that some of the money transferred by Israel to the Palestinian National Authority (PNA) will be frozen.

Israel collects customs duties on goods exported to the occupied West Bank and Gaza Strip via Israeli ports and then transfers the funds to the PNA. The levies amount to some 127 million U.S. dollars per month.

Last year, the Knesset (parliament) passed a law under which the government could partially withhold these funds. The law was approved in response to payments that the PNA transfers to families of prisoners jailed in Israel for attacks of Israelis.

"By the end of the week, the staff-work necessary for implementing the law on deducting terrorists' salaries will be completed," Netanyahu said at the start of the weekly cabinet meeting.

"Next Sunday I will convene the security cabinet and we will approve the necessary decision to deduct the funds. Let nobody doubt, the funds will be deducted, at the start of next week," he said.

Netanyahu's statement comes amid calls by right-wing leaders to withhold Palestinian funds in the wake of last week's killing of an Israeli young woman by a Palestinian man.

The move also comes amid pre-elections period in Israel, as Netanyahu and other ministers are seeking to be re-elected in the April 9.