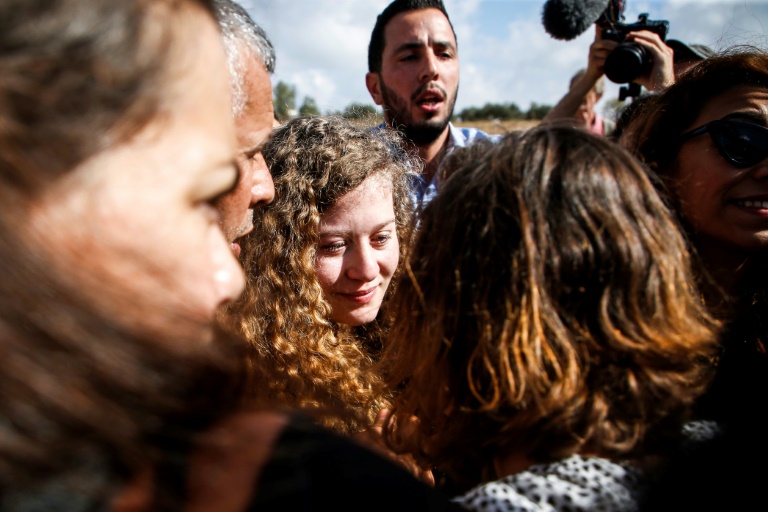 Palestinian teenager Ahed Tamimi was released from prison Sunday after serving eight months for slapping two Israeli soldiers, an episode captured on video that made her a symbol of resistance for

Palestinians.Tamimi, 17, and her mother Nariman arrived in their village of Nabi Saleh in the occupied West Bank, where they were met by crowds of supporters and journalists.

"The resistance continues until the fall of the occupation, and of course the (female) prisoners in jail are all strong," Ahed Tamimi said, her voice barely audible above the crowd.

"I thank everyone who supported me in this sentence and supports all the prisoners."

Her father Bassem put his arms around Ahed and her mother as they walked together along the road, the crowd chanting "we want to live in freedom".

Abbas "praised Ahed and described her as a model of the Palestinian struggle for freedom, independence and statehood," according to a statement on official news agency WAFA.

"He stressed that non-violent resistance which Ahed embodies has proven to be an ideal and vital weapon in facing the repression of the Israeli occupation."

Israeli authorities appeared keen to avoid media coverage of the release as much as possible, and conflicting information had meant supporters and journalists scrambled to arrive on time at the correct

Tamimi and her mother had been driven early on Sunday from Israel's Sharon prison into the occupied West Bank, authorities said.

But the location of the checkpoint where they were to cross into the territory was changed three times before it was finally announced they were being taken to a crossing at Rantis, about an hour's drive

from the initial location.

Family members and supporters gathered at the checkpoint to greet them, but the military vehicles driving them did not stop, instead continuing towards Nabi Saleh.

There had been slight tension at the checkpoint before Tamimi's arrival as a few men with Israeli flags approached supporters holding Palestinian flags. Words were exchanged but there was no violence.

In a sign of the sensitivity of the case, Israeli authorities on Saturday arrested two Italians and a Palestinian for painting Tamimi's now-familiar image on the Israeli separation wall cutting off the West Bank.

Both Tamimi and her mother were sentenced to eight months in an Israeli military court following a plea deal over the December incident, which the family said took place in their garden in Nabi Saleh.

They were released some three weeks early, a common practice by Israeli authorities due to overcrowded prisons, Tamimi's lawyer Gaby Lasky said.

Video of the December incident went viral, leading Palestinians to view her as a hero standing up to Israel's occupation.

But for Israelis, Tamimi is being used by her activist family as a pawn in staged provocations.

They point to a series of previous such incidents involving her, with older pictures of her confronting soldiers shared widely online.

Many Israelis also praised the restraint of the soldiers, who remained calm throughout, though others said her actions merited a tougher response.

Omar Shakir of Human Rights Watch tweeted on Sunday that "Israel's jailing of a child for 8 months -- for calling for protests & slapping a soldier -- reflects endemic discrimination, absence of due process &

"Ahed Tamimi is free, but 100s of Palestinian children remain locked up with little attention on their cases," he said.

Tamimi was arrested in the early hours of December 19, four days after the incident in the video. She was 16 at the time.

Her mother Nariman was also arrested, as was her cousin Nour, who was freed in March.

Israel's military said the soldiers had been in the area on the day of the incident to prevent Palestinians from throwing stones at Israeli motorists.

The video shows the cousins approaching two soldiers and telling them to leave, before shoving, kicking and slapping them. Ahed Tamimi is the most aggressive of the two in the video.

The heavily armed soldiers do not respond in the face of what appears to be an attempt to provoke rather than seriously harm them.

They then move backwards after Nariman Tamimi becomes involved.

The scuffle took place amid clashes and protests against US President Donald Trump's controversial recognition of Jerusalem as Israel's capital.

Relatives say that a member of the Tamimi family was wounded in the head by a rubber bullet fired during those protests.