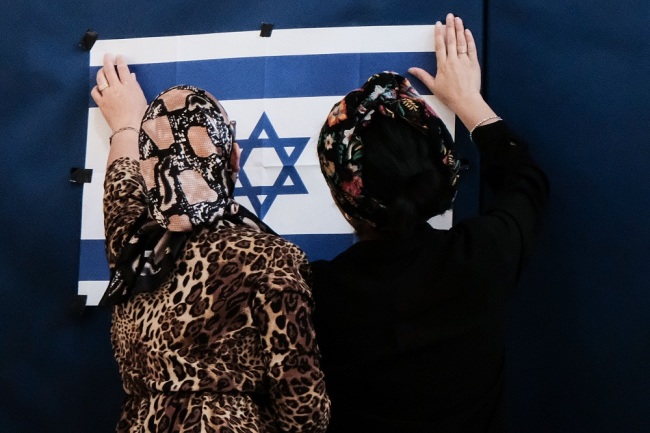 Polling Station Election Committee members hang the Israel flag ahead of the arrival of President Rivlin to cast his vote in round 2 of Israel's 2019 national elections for parliament, the 22nd Knesset, September 17, 2019. (File Photo: IC)

Israeli lawmakers were sworn into the new parliament, or Knesset, on Thursday afternoon, without a new government formed, after tight results in the country's do-over elections caused a political deadlock.

The ceremony marked the inauguration of Israel's 22nd Knesset.

The event began with an address by Israeli President Reuven Rivlin to the newly-elected 120 members of the Knesset.

He urged the right-wing Likud party and the centrist Blue and White party to form a broad unity government after the do-over elections were concluded with inconclusive results, meaning both sides did not win enough votes to form a government.

The Arab-Jewish Joint List's 13 newly-elected lawmakers did not attend the ceremony in protest of wave of deadly violence in Arab communities.

The Arab-Jewish Joint List, Israel's third-largest party, said the move was part of a day-long general strike in Arab communities to urge Israeli authorities to act against the violence.

According to police figures, at least 70 Arabs, Israel's largest minority, have been killed since the beginning of 2019.

The elections on Sept. 17 were the second time Israeli cast their ballots in five months.

The efforts to form a new government are taking place while Netanyahu is entangled in legal struggles that threaten to end his long-time hold to power.

On Wednesday, Israeli Attorney-General Avichai Mandelblit opened a series of hearings over three criminal corruption cases in which Netanyahu is the main suspect.

Mandelblit already said he intends to indict Netanyahu with bribery, fraud, and breach of trust. His final decision is expected after the four-day hearings.