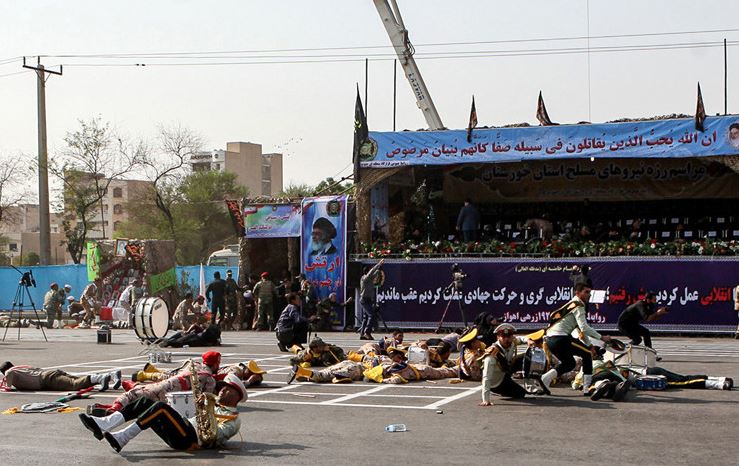 This picture taken on Sept. 22, 2018 in the southwestern Iranian city of Ahvaz shows injured soldiers lying on the ground at the scene of an attack on a military parade. (Photo: AFP)

At least 24 were killed and 60 others injured in the Ahvaz attack.

Iran's Fars News Agency reported that some missiles carried slogans reading "death to Israel," "death to the US," and "death to Saudi Arabia."

"Iran's attempt to tie Israel to the terrorist attack in southern Iran is ridiculous," Netanyahu said in a statement released by his office.

Israel has carried out hundreds of airstrikes in Syria over the past years, saying the attacks aim to prevent Iran from establishing military bases in Syria and stop convoys carrying advanced weapons to the Lebanese militia of Hezbollah.

In his address to the UN General Assembly on Sept. 27 in New York, Netanyahu accused Iran of holding a "secret nuclear warehouse" in Tehran, which was later denied by Iranian officials.

In addition, the US intelligence officials were quoted by Israeli media as saying that the Iranian site does not hold nuclear materials.