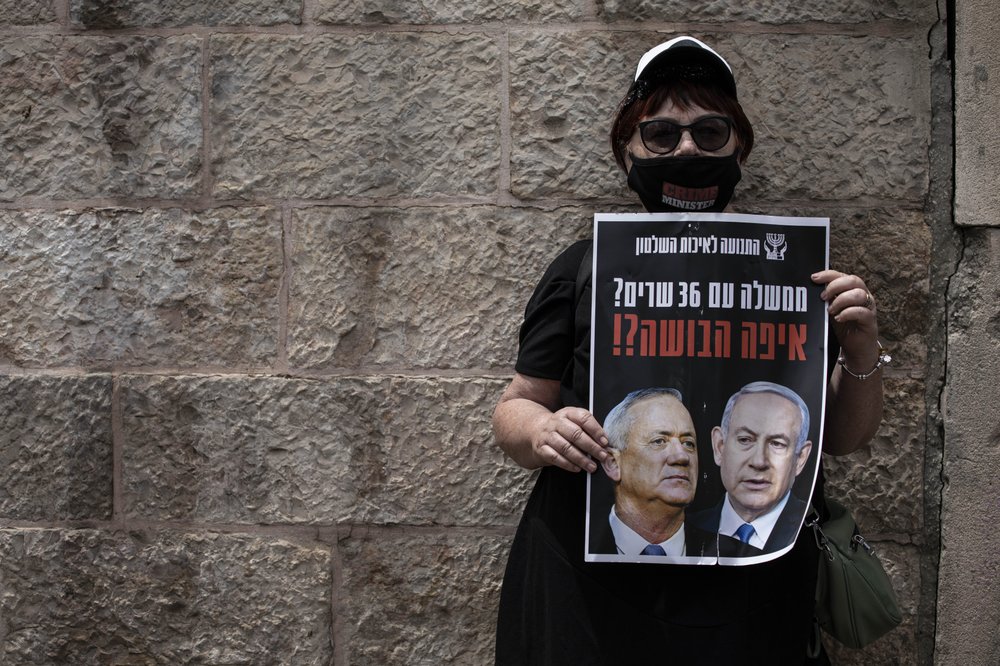 A woman wears a mask for protection against the spread of the coronavirus holds a sign that reads: 'a government with 36 ministers? Where is the shame?'" in Jerusalem, Sunday, May 3, 2020. (Photo: AP)

JERUSALEM, May 6 (Xinhua) -- Israeli Prime Minister Benjamin Netanyahu and Benny Gantz, leader of the centrist party of Blue and White, agreed on Wednesday to swear in the new unity government next week.

Netanyahu's rightwing Likud party and Gantz's Blue and White party said in a joint statement that the new coalition will be inaugurated on May 13 if the parliament will approve the unity deal.

The parliament plenum had been prepared for all-night votes on some 1,000 proposed amendments to the coalition deal submitted by the opposition, in order to pass the agreement before Thursday, the deadline after which a mandate given to Gantz and Netanyahu to form the government would expire.

But later, the opposition abruptly withdrew all the amendments in a bid to embarrass the emerging coalition that was not ready to vote on the final version of the agreement.

Netanyahu and Gantz met earlier on Wednesday but could not come up with an agreed candidate to lead the health ministry as well as several other issues.

On Wednesday night, a panel of 11 Israeli Supreme Court judges unanimously rejected a series of petitions asking for banning Netanyahu from leading the new government and cancelling the unity deal.

The ruling removes a major hurdle in Netanyahu's way to form the new government following the March 2 elections.

Under the unity deal, Netanyahu will continue to serve as the prime minister for 18 months before being replaced by Gantz.

Netanyahu warned on Tuesday that if the Supreme Court will cancel the deal, Israel might face the fourth elections after three rounds of votes in fewer than a year produced inconclusive results.

He is indicted for bribery, fraud and breach of trust in three separate cases. His trial is scheduled to begin on May 24 in the Jerusalem District Court.