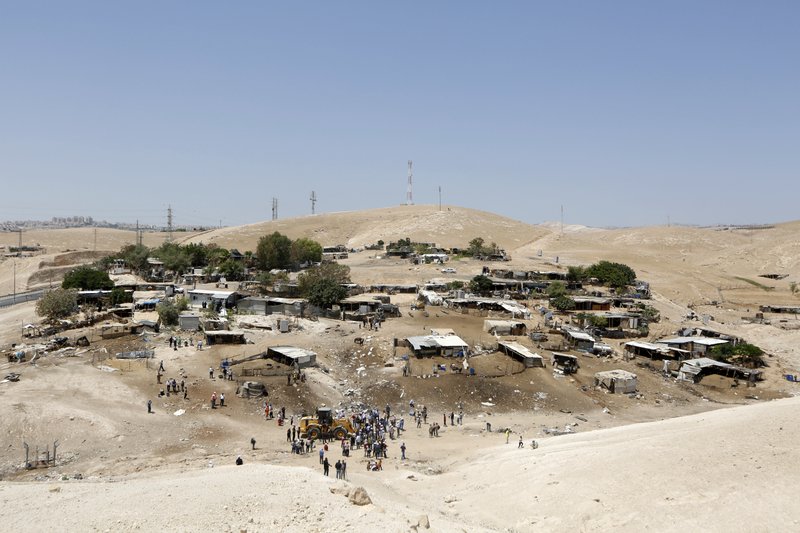 Israel’s Supreme Court on Wednesday cleared the way for the demolition of a Bedouin village in the West Bank, rejecting a final appeal in a case that has drawn heavy international criticism and become a rallying cry for the Palestinians.

The court rejected an appeal to block the demolition of Khan al-Ahmar. It said that a stay would expire in a week, and the encampment could then be legally torn down. There was no date immediately announced for the demolition.

The United Nations, the European Union and others have expressed concern over the fate of Khan al-Ahmar, which is just east of Jerusalem. Palestinian leaders have repeatedly gathered at the spot to protest the planned demolition.

Israel claims the village, an encampment of corrugated shacks outside the Kfar Adumim settlement, was illegally built and has offered to resettle residents 12 kilometers (7.5 miles) away. But critics say it’s impossible for Palestinians to get building permits and that the demolition is meant to make room for an Israeli settlement.

The three judges hearing the appeal said they were presented no evidence to warrant overturning the previous verdict and there was no question over the illegality of the construction on the site.

Defense Minister Avigdor Lieberman lauded the judges for their “brave” ruling in the face of a “hypocritical” campaign directed by the Palestinians, the Israeli left and European countries.

“No one is above the law. No one can stop us from implementing our sovereignty and responsibility as a state,” he said.

Amnesty International said the court approved a “war crime,” citing the forcible transfer of people under occupation as a violation of the fourth Geneva convention.

“With this shameful and manifestly unlawful ruling, the Supreme Court has confirmed a pattern of complicity in the crime of forcible transfer of Palestinian communities for the expansion Jewish only settlements,” Amnesty’s head of office in Jerusalem, Saleh Higazi, said in a statement.

Residents remained defiant and said they would resist the move.

“We will stand against this decision and we will not leave our land,” said Ibrahim Abu Dahook, who lives in the encampment.

The village is in the 60 percent of the West Bank known as Area C, which remains under exclusive Israeli control and is home to dozens of Israeli settlements. Israel places severe restrictions on Palestinian development there and home demolitions are not unusual.

In rare cases, Israel has also evicted Jewish settlers who have squatted illegally. But settlers generally have a much easier time receiving building permits, and the government often retroactively legalizes unauthorized outposts, looks the other way or offers compensation to uprooted settlers.

As part of interim peace deals in the 1990s, the West Bank was carved up into autonomous and semi-autonomous Palestinian areas, known as Areas A and B, and Area C, which is home to some 400,000 Israeli settlers.

The Palestinians claim all of the West Bank and say that Area C, home to an estimated 150,000 to 200,000 Palestinians, is crucial to the economic development of their future state.

Israel says the structures that make up the Khan al-Ahmar encampment, which include an Italian-funded school, pose a threat to residents because of their proximity to a highway. Critics have dismissed this claim as a ploy to remove the village’s 180 or so residents.

The tribe of previously nomadic Bedouin have lived in the area for decades after migrating from the southern Negev desert after Israel’s creation in 1948, herding and grazing goats and sheep in the hills east of Jerusalem, the West Bank’s narrowest part. In time, they found themselves nestled between two major Israeli settlements, and developers were calling for them to be evacuated. The case has been in legal limbo for nearly a decade, with the court issuing repeated stays, but Wednesday’s ruling appears to remove the final obstacle to demolition.

The U.N. High Commissioner for Human Rights’ office has called on Israel to abandon its plans and said the destruction of private property by an occupying power violates international law. The European Union has asked Israel to reconsider the planned demolition.

The West Bank’s Arab Bedouin are a small, impoverished minority among the broader Palestinian population. As in many other Bedouin encampments, residents of Khan al-Ahmar live in corrugated shacks or tents, often without electricity or running water, and raise livestock.

The Palestinian Education Ministry recently decided to start the schoolyear early for 170 elementary students in Khan al-Ahmar and four nearby Bedouin communities to try to pre-empt any Israeli move.