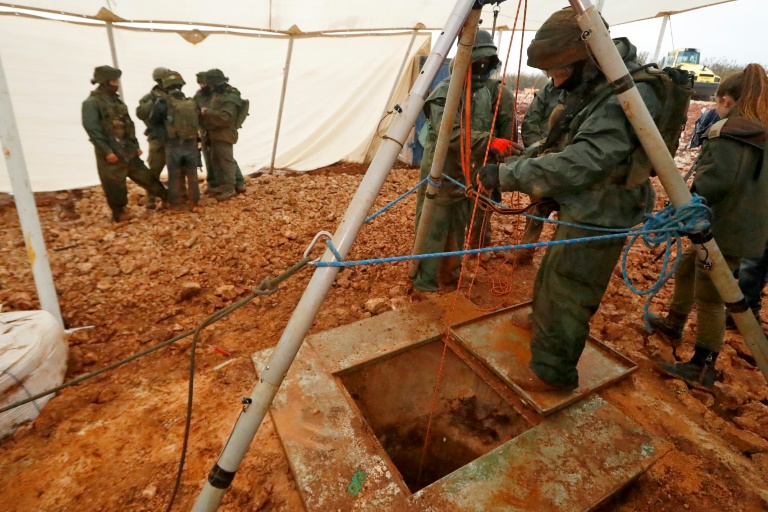 Israel said Sunday it had uncovered all cross-border attack tunnels dug by Hezbollah from Lebanon and will bring its operation to find and destroy them to an end after more than a month.

The operation begun on December 4 had raised concerns that Hezbollah, the Lebanon-based Shiite group and enemy of Israel, would respond and spark a new conflict between them, but the border has remained calm throughout.

Israeli soldiers are pictured during a tour on December 19, 2018, next to a hole dug by the army to intercept a suspected Hezbollah tunnel near the Lebanon-Israel border

An Israeli military spokesman declined to say how many tunnels had been discovered in total, but the army has announced six since the operation was launched.

The last tunnel was exposed on Saturday, the army said.

"We have found yet another Hezbollah cross-border attack tunnel from Lebanon to Israel," Lieutenant Colonel Jonathan Conricus told reporters.

"According to our intelligence and our assessment of the situation there are no longer any cross-border attack tunnels from Lebanon into Israel."

The latest tunnel began in the Lebanese village of Ramyeh, some 800 metres (yards) away from Israel, the army said.

It reached a few dozen metres into Israel, and at 55 metres underground was the deepest as well as "the longest and most detailed" of all the tunnels the army exposed, Conricus said.

The army said its discovery marked the end of the operation that it called "Northern Shield" and that the last tunnel will be destroyed in the coming days.

The tunnels are being destroyed either with explosives or by filling them with a cement-like material to make them unusable.

Conricus said there were no more tunnels reaching Israel from Lebanon but the army was still monitoring "facilities" being dug by Hezbollah inside Lebanese territory.

"We have achieved the goal (to expose and destroy the tunnels from Lebanon) which we set out to achieve at the beginning," Conricus said.

He also reiterated that Israel holds the Lebanese government accountable "for any act of violence or violation of 1701," the UN resolution that ended the 2006 war between Israel and Hezbollah.

UNIFIL, the UN peacekeeping force in Lebanon, was informed of the latest tunnel, Conricus said.

Israel alleges Hezbollah had planned to use the tunnels to kidnap or kill its civilians or soldiers, and to seize a slice of Israeli territory in the event of any hostilities. It has said, however, that they were not yet operational.

A month-long war in 2006 between Israel and Hezbollah killed more than 1,200 Lebanese, mostly civilians, and more than 160 Israelis, mostly soldiers.

Israel says all anti-tunnel operations have taken place within its territory, and the highly publicised mission has gone ahead without drawing a military response from Hezbollah.

The announcement that the operation is ending comes as military chief of staff Gadi Eisenkot steps down at the end of his term.

Israeli analysts see the operation as one of Eisenkot's important achievements.

Prime Minister Benjamin Netanyahu listed the tunnel operation on Sunday when thanking Eisenkot for his 40 years of military service, including the last four as chief of staff.

"We are thus approaching the completion of the goal we set at the outset of Operation Northern Shield: the eradication of Hezbollah's tunnels weapon," Netanyahu said at the start of a cabinet meeting.

Neither Lebanon nor Hezbollah has commented directly on the end of the operation.

Lebanese officials however held talks on Sunday with US Under Secretary of State David Hale that included discussion of the border area, statements from both sides said.