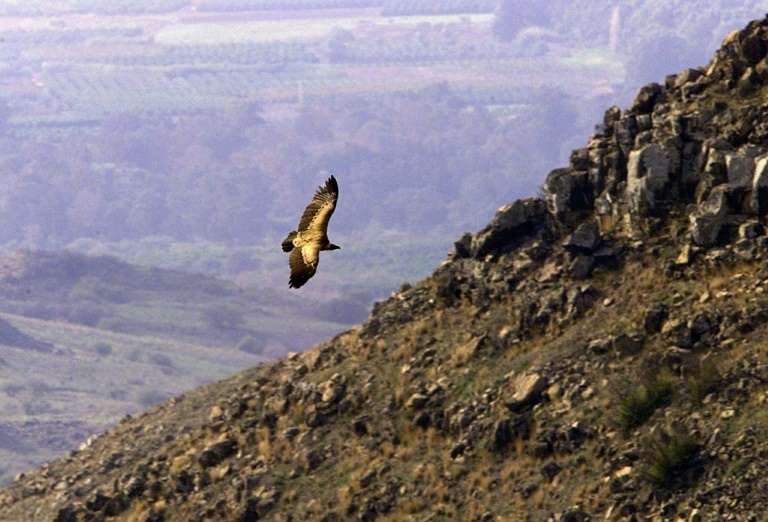 The vulture population in the Israeli-annexed Golan Heights has declined significantly over the past two decades. (Photo: AFP)

Nearly half of the vulture population in the Israeli-annexed Golan Heights have died of apparent poisoning, Israel's Nature and Parks Authority Friday, in a new blow to an already decimated breed.

Eight out of around 20 griffon vultures left in the area were found dead on Friday, the organisation's director Shaul Goldstein told AFP, in what he described as "a mortal blow to the birds of prey population".

The Israeli parks authority said the deaths constituted "a serious matter", and vowed to find "those responsible for this poisoning and bring them to justice".

A fox and two jackals were also found dead and two other vultures sick were taken to a wildlife clinic for treatment.

Goldstein declined to say if the poisoning was deliberate.

The vulture population on the Israeli side of the Golan Heights has declined significantly over the past two decades, with their number dropping from 130 in 1998 to around 20 before the latest deaths.

In 2016, UN peacekeepers helped return a vulture which had been captured across the border in Lebanon on suspicion of spying for the Jewish state.

Israel seized around 1,200 square kilometres of the Golan from Syria in a 1967 and later annexed it, in moves never recognised by the international community.

About 18,000 Syrians belonging to the Druze community -- most of whom refuse Israeli citizenship -- remain in the occupied Golan, alongside some 20,000 Israeli settlers in 33 communities.