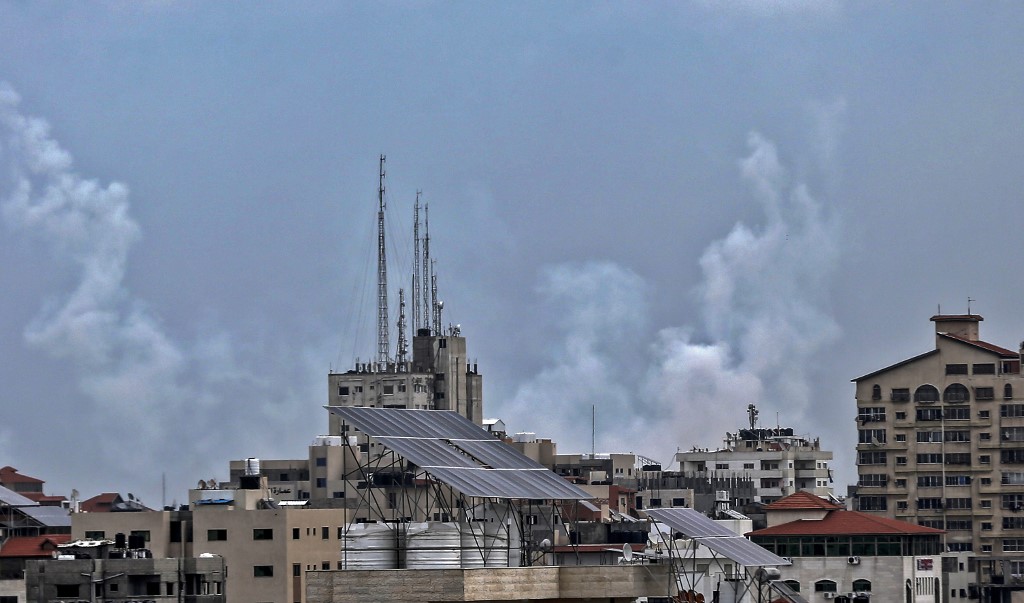 This picture taken on February 24, 2020, shows the smoke trails from a rocket fired by Palestinian militants flying over the Gaza Strip. (Photo: AFP)

A spokesperson with the Israeli military said in a statement that the raids were a response to at least 21 rockets fired by the Islamic Jihad, a Palestinian armed group, toward southern Israel on Sunday. No casualties were reported.

The Islamic Jihad said the rockets were a retaliation for the killing of an operative with the group near the fence separating between the besieged Palestinian enclave and Israel.

Palestinians were outraged by video footage showing an Israeli bulldozer lifting and dragging the lifeless body of the operative.

According to the Israeli spokesperson, overnight between Sunday and Monday, Israeli war jets struck Islamic Jihad sites south of Damascus and "dozens" of sites belonging to the Islamist group throughout the Gaza Strip.

Syrian Observatory for Human Rights, a London-based war monitor, said a missile hit a position where officers of the Iranian Revolutionary Guards Corps (IRGC) and Islamic Jihad militants were located.

Syrian air defenses intercepted some of the missiles before they reached their targets, the group said in a statement on its website.

Six people were killed in the strikes, including two Islamic Jihad members and four militants with an Iran-backed militia.

In Gaza, Israeli war jets attacked Islamic Jihad underground infrastructures and compounds used to store raw material for the manufacturing of rockets, both were located in Rafah and belonged to the Islamic Jihad.

Both Islamic Jihad and the Israeli army issued threats warning each other of further aggressions.

On Monday morning, the army blocked areas and routes in the vicinity of the Gaza Strip, in apparent preparation for further escalation.

A military notice said the move was made "following the situation assessment," adding that civilians were required to avoid any stops by the side of the road in the area surrounding the Gaza Strip.