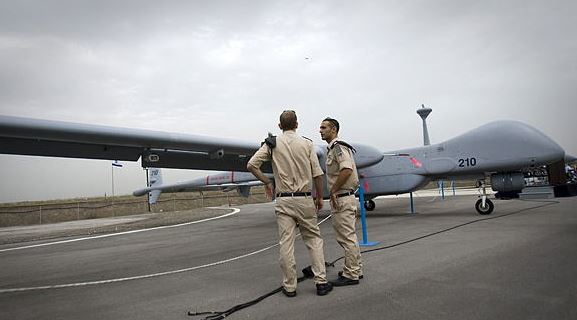 On February 21, 2010, at the Telef Air Force Base near Tel Aviv, Israel, two Israeli soldiers stand next to the "Heron" TP drone. (Photo: Xinhua)

The Heron, a medium-altitude long-endurance drone capable of performing strategic and tactical missions, can carry a payload of up to 470 kg, stay in the air for more than 45 hours, reach 35,000 feet high and has a flight range of 350 km.

The total length of the aircraft is 8.5 meters, with a wingspan of 16.6 meters.

The Heron is one of the most operational weapon systems in the Israel Air Force, which uses it for reconnaissance and intelligence gathering.

In recent years, the Heron has also been sold to France and Turkey, and leased to Canada and Australia. Morocco also operates the Heron acquired from France.

Last June, Israel signed a 600-million-dollar deal to lease 7 UAVs from the enlarged Heron-TP model to the German army.

Established in 1953 as a government company, IAI is considered a global leader in the supply of technologies and systems in the domains of land, air, sea, outer space and cyber.