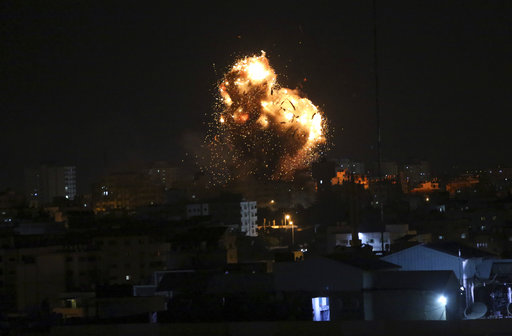 An explosion caused by Israeli airstrikes on the building of Hamas' Al-Aqsa TV station in Gaza City, Monday, Nov. 12, 2018. Palestinian militants on Monday fired dozens of rockets and mortar shells into southern Israel, and the Israeli military responded by dispatching fighter jets to strike throughout the Gaza Strip. (File photo: AP)

JERUSALEM, Jan. 7 (Xinhua) -- The Israeli military said on Monday that it struck the northern Gaza Strip overnight in retaliation for the rocket fire toward southern Israel.

A military spokesperson said in a statement that fighter jets and an attack helicopter struck several targets at a military camp belonging to Hamas that runs Gaza.

The strike came in the wake of rocket fire toward the coastal city of Ashkelon and Hof Ashkelon Regional Council in the Southern District of Israel. The rocket was intercepted by the Iron Dome anti-rocket system.

No injuries were immediately reported from both sides.

The Israeli military said it holds Hamas "accountable for all that happens in the Gaza Strip and from it," while Palestinians say the violence is the result of a crippling blockade Israel has imposed on the Palestinian enclave since 2007.

Since late March 2018, protests and clashes have haunted the border fence separating Gaza from Israel.

At least 240 Palestinians have since been killed by Israeli gunfire, while two Israeli soldiers were killed, one by a sniper and the other during an undercover operation inside Gaza that was exposed.