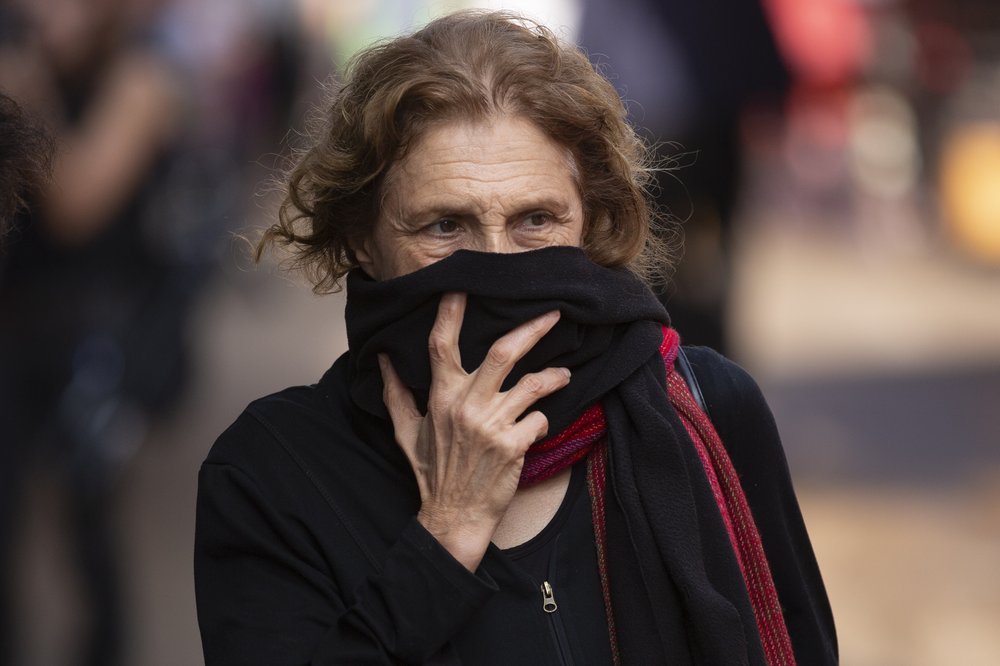 A woman covers her face as she shops at a food market in Tel Aviv, Israel, Sunday, March 15, 2020. ‏Israel has imposed a number of tough restrictions to slow the spread of the new coronavirus. (Photo: AP)

Israel has long been known for its use of technology to track the movements of Palestinian militants. Now, Prime Minister Benjamin Netanyahu wants to use similar technology to stop the movement of the coronavirus.

Netanyahu’s Cabinet on Sunday authorized the Shin Bet security agency to use its phone-snooping tactics on coronavirus patients, an official confirmed, despite concerns from civil-liberties advocates that the practice would raise serious privacy issues. The official spoke on condition of anonymity pending an official announcement.

Netanyahu announced his plan in a televised address late Saturday, telling the nation that the drastic steps would protect the public’s health, though it would also “entail a certain degree of violation of privacy.”

Israel has identified more than 200 cases of the coronavirus. Based on interviews with these patients about their movements, health officials have put out public advisories ordering tens of thousands of people who may have come into contact with them into protective home quarantine.

MORE ON THE VIRUS OUTBREAK:

The new plan would use mobile-phone tracking technology to give a far more precise history of an infected person’s movements before they were diagnosed and identify people who might have been exposed.

In his address, Netanyahu acknowledged the technology had never been used on civilians. But he said the unprecedented health threat posed by the virus justified its use. For most people, the coronavirus causes only mild or moderate symptoms. But for some, especially older adults and people with existing health problems, it can cause more severe illness.

“They are not minor measures. They entail a certain degree of violation of the privacy of those same people, who we will check to see whom they came into contact with while sick and what preceded that. This is an effective tool for locating the virus,” Netanyahu said.

The proposal sparked a heated debate over the use of sensitive security technology, who would have access to the information and what exactly would be done with it.

Nitzan Horowitz, leader of the liberal opposition party Meretz, said that tracking citizens “using databases and sophisticated technological means are liable to result in a severe violation of privacy and basic civil liberties.” He said any use of the technology must be supervised, with “clear rules” for the use of the information.

Netanyahu led a series of discussions Sunday with security and health officials to discuss the matter. Responding to privacy concerns, he said late Sunday he had ordered a number of changes in the plan, including reducing the scope of data that would be gathered and limiting the number of people who could see the information, to protect against misuse.

The only other place believed to have used similar technology to fight coronavirus is Taiwan, where the government used mobile phones to make sure infected people didn’t leave quarantine.

Netanyahu’s office said the Shin Bet would not be involved in enforcing quarantine orders against sick patients. It also said the order, which still needs approval from a parliamentary subcommittee, would be in effect for no more than 30 days.

Yuval Elovici, the head of the cybersecurity research center at Israel’s Ben-Gurion University, said there are ways to minimize privacy concerns, including the possibility of collecting data anonymously, and that the benefits are too great to ignore.

“There is no doubt about the privacy issue,” he said. “But in a technological society, it makes sense to use such technology to save lives. I personally strongly support it.”