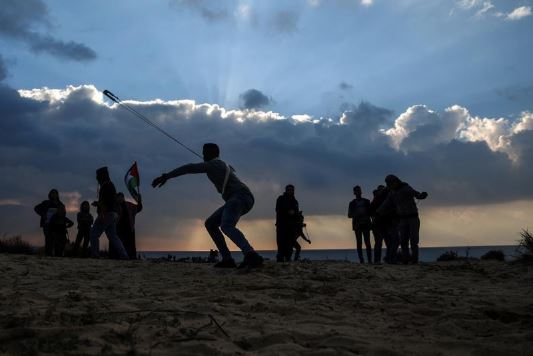 A Palestinian protestor uses a slingshot to hurl stones at Israeli troops during clashes on a beach near the border with Israel in the northern Gaza Strip, Dec. 24, 2018. (Photo: Xinhua)

GAZA, May 4 (Xinhua) -- Israel decided to close borders and sea coast of the Gaza Strip in the wake of the flaring tension with the Palestinian militants, Palestinian officials said Saturday.

Raed Fattouh, head of the committee to coordinate the entrance of goods into Gaza, told reporters that the Israeli side informed his office that the commercial crossing of Kerem Shalom will be closed on Sunday until a further notice.

The Palestinian Authority liaison office also announced in a press statement that Israel informed that Erez crossing on the border between northern Gaza Strip and Israel will also be closed on Sunday.

Meanwhile, chairman of the Fishermen Association in Gaza Nizar Ayyash said in a statement that the Israeli authorities decided to close the sea coast of the Gaza Strip and prevent fishermen from fishing starting from Saturday night.

"The Israeli decision of closing the land and the sea of the Gaza Strip is unfair," said Ayyash.

On Saturday, one Palestinian was killed and seven others wounded in a new wave of tension between Israel and the Palestinians in the Gaza Strip, which is ruled by Islamic Hamas movement.

Israel Radio reported that the Israeli army Air Forces warplanes struck with missiles more than 25 posts and military facilities in the Gaza Strip that belong to Hamas and Islamic Jihad militants.

The Israeli airstrikes were a response to over 150 rockets and projectiles fired from Gaza into Israel.

The Palestinian Authority condemned the Israeli airstrikes and called on the international community to pressure Israel to stop.