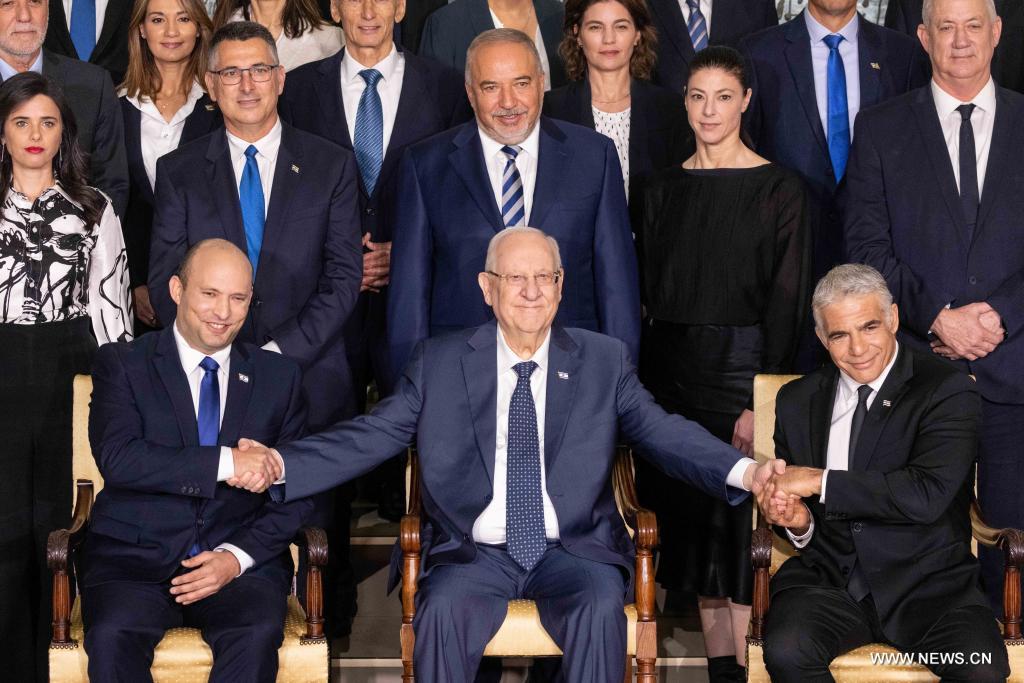 Naftali Bennett, a former ally of Netanyahu turned rival, became the new prime minister after the 60-59 vote. Promising to try to heal a divided nation, Bennett will preside over a diverse and fragile coalition comprising eight parties with deep ideological differences.

At the same time, the 27 ministers of the new governing coalition were also sworn in.

But Netanyahu, 71, made clear he has no intention of exiting the political stage. "If it is destined for us to be in the opposition, we will do it with our backs straight until we topple this dangerous government and return to lead the country," he said.

The vote, capping a stormy parliamentary session, ended a two-year cycle of political crisis in which the country held four deadlocked elections. Those votes focused largely on Netanyahu's divisive rule and his fitness to remain in office while on trial for corruption charges.

To his supporters, Netanyahu is a global statesman uniquely capable of leading the country through its many security challenges.

But to his critics, he has become a leader who used divide-and-rule tactics to aggravate the rifts in Israeli society. Those include tensions between Jews and Arabs, and within the Jewish majority between his religious and nationalist base and his more secular and dovish opponents.

Outside the parliament, or Knesset, hundreds of protesters watching the vote on a large screen erupted into applause when the new government was approved. Thousands of people, many waving Israeli flags, celebrated in central Tel Aviv's Rabin Square.

US President Joe Biden quickly congratulated the new government. Bennett's office said he later spoke by phone with Biden, thanking him for his warm wishes and longstanding commitment to Israel's security.

Bennett, 49, now faces a tough test maintaining a coalition from the political right, left and center.

The razor-thin 60-59 vote of confidence in an eight-party coalition of left-wing, centrist, right-wing and Arab parties with little in common except a desire to unseat Netanyahu only underscored its likely fragility, Reuters commented.

The coalition, including a small Islamist faction that is making history as the first Arab party to sit in a coalition, agrees on little beyond its opposition to Netanyahu. The parties within it are likely to pursue a modest agenda that seeks to reduce tensions with the Palestinians and maintain good relations with the US without launching any major initiatives.

"We will forge forward on that which we agree－and there is much we agree on, transport, education and so on, and what separates us we will leave to the side," Bennett said. He also promised a "new page" in relations with Israel's Arab sector.

But Bennett, like Netanyahu, opposes the establishment of a Palestinian state. He also vowed, like his predecessor, to oppose US-led efforts to restore an international nuclear accord with Iran.

In opposition, Netanyahu remains head of the largest party in parliament. The new coalition is a patchwork of small and midsize parties that could collapse if any of its members decide to bolt. Bennett's party, for instance, holds just six seats in the 120-seat parliament.

Yohanan Plesner, president of the Israel Democracy Institute, a nonpartisan think tank, said the new government will likely be more stable than it appears. Each party in the coalition will want to prove that it can deliver. For that, they need "time and achievements", he said. Still, Netanyahu "will continue to cast a shadow", he said.

The driving force behind the coalition is Yair Lapid, a political centrist who will become prime minister in two years in a rotation agreement with Bennett.