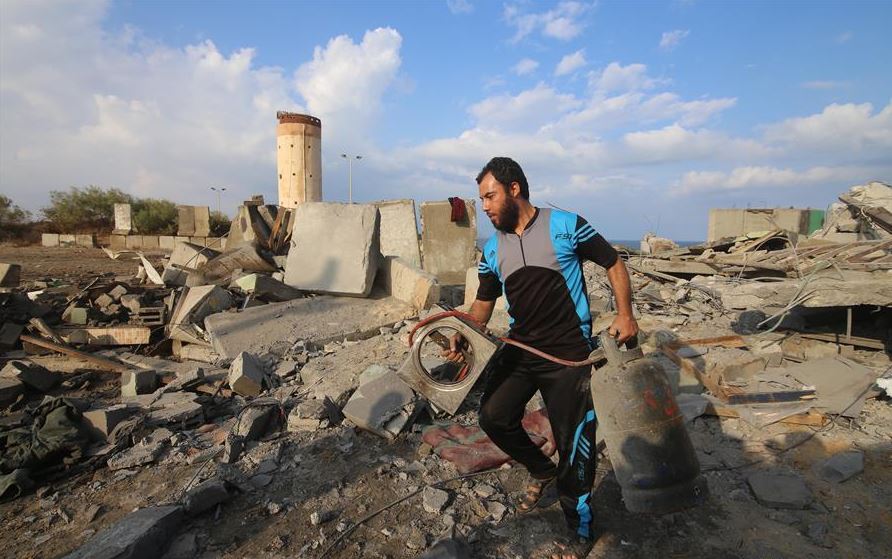 A Palestinian inspects the rubbles following an Israeli airstrike in the southern Gaza Strip city of Rafah, on Oct. 17, 2018. (Photo: Xinhua/Khaled Omar)

GAZA, Oct. 17 (Xinhua) -- One Palestinian killed and three injured Wednesday morning in Israeli airstrikes on military facilities in the Gaza Strip in response to a rocket attack from Gaza into Israel, security sources and medics said.

Eyewitnesses and security sources in Gaza said that Israeli war jets targeted six different military facilities all over the Gaza Strip with missiles, adding that six huge bombs were heard all over the coastal enclave.

An Israeli army spokesman said in a press statement that war jets of Israeli Air Forces carried out a series of airstrikes on the Gaza Strip in response to firing a rocket and arson balloons into Israel.

A rocket was fired from the Gaza Strip into Israel overnight and landed at a yard of a house in the town of Beer Sheba in southern Israel, which had lightly injured three Israelis.

Israeli Radio reported that Israel announced that the two crossing points between the Gaza Strip and Israel for goods and individuals movement are closed and the allowed area for fishing has been reduced.

The fresh escalation of violence in Gaza happened as a senior Egyptian security intelligence delegation arrived in the Gaza Strip on Tuesday to mediate a calm agreement between Israel and Hamas-led Gaza militant groups.

Sources close to Hamas said the Egyptian delegation has been holding talks with senior Hamas leaders over the current developments in the Gaza Strip as well as a truce with Israel and reconciliation with Fatah Party of Palestinian President Mahmoud Abbas.