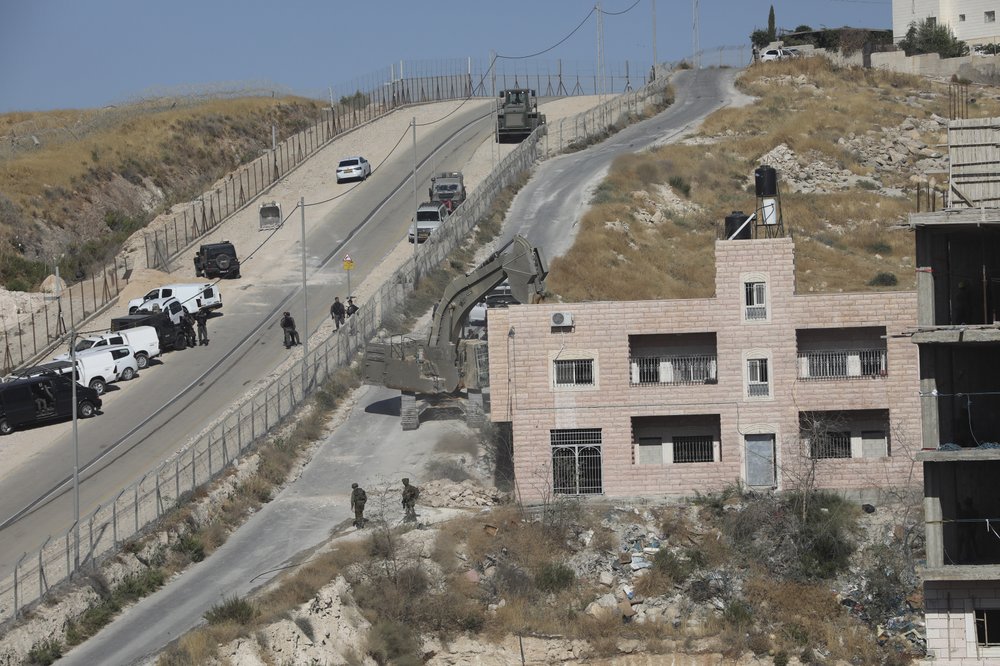 Israeli work crews on Monday began demolishing dozens of Palestinian homes on the outskirts of an east Jerusalem neighborhood, in one of the largest operations of its kind in years.

The demolitions capped a years-long legal battle over the buildings, constructed near the invisible line straddling the city and the occupied West Bank. Israel says the buildings were erected too close to its West Bank separation barrier. Residents say the buildings are on West Bank land, and the Palestinian Authority gave them construction permits.

In the wake of a recent Supreme Court decision clearing the way for the demolitions, Israeli work crews moved into the neighborhood overnight. Massive construction vehicles smashed through the roofs of several buildings, and large excavators were digging through the rubble.

He said that those who built houses along the separation barrier “took the law into their own hands.”

According to the United Nations, some 20 people already living in the buildings were being displaced, while 350 owners of properties that were under construction or not yet inhabited were also affected.

In a joint statement, senior U.N. humanitarian officials in the region expressed “sadness” over the demolitions and warned that many other homes could face “the same fate.”

“Israel’s policy of destroying Palestinian property is not compatible with its obligations under international humanitarian law,” they said.

In Gaza, the territory’s Hamas rulers called for intensifying “resistance” to “the Zionist settlement project.”

“The increase in the occupation’s crimes against the residents of the holy city is a result of total American support,” said Hazem Qassem, a spokesman for the militant group.

Israel captured east Jerusalem and the West Bank in the 1967 Mideast war. The international community considers both areas to be occupied territory, and the Palestinians seek them as parts of a future independent state.

Israel annexed east Jerusalem and considers it part of its capital — a step that is not internationally recognized. But the competing claims to the territory have created myriad legal complexities.

Israel built its separation barrier in the early 2000s in a move it says was needed to prevent Palestinian suicide bombers from reaching Israel from the West Bank. The Palestinians say the structure is an illegal land grab because it juts into the West Bank in many places.

Sur Baher is one of those places. In negotiations with residents, Israel built the route of the structure in Sur Baher inside the West Bank to prevent dividing the village and disrupting life, according to court documents.

Residents, claiming it is impossible to get Israeli building permits in east Jerusalem, began building the apartment buildings in the West Bank part of the village with permission from the Palestinian Authority.

Early this decade, the Israeli military ordered the construction to stop, saying it could not permit high-rise buildings so close to the separation barrier.

According to Ir Amim, an Israeli advocacy group that promotes equality and coexistence in the city, Israel has stepped up demolitions of unauthorized Palestinian properties in east Jerusalem.

It said Israel demolished some 63 housing units in the first half of this year, compared to 37 during the same period last year. Palestinian residents of east Jerusalem say it is nearly impossible to get a building permit from Israeli authorities.