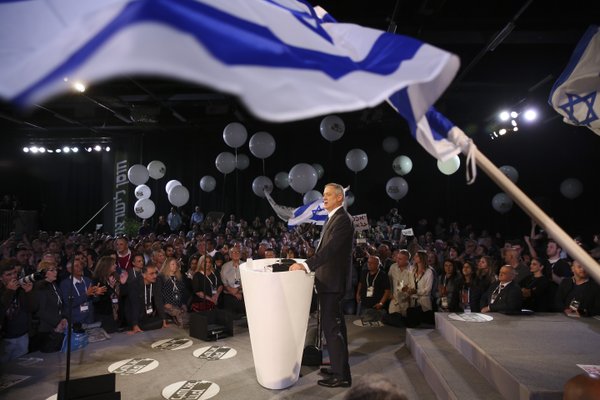 Retired Israeli military chief Benny Gantz on Tuesday launched his campaign to be prime minister, presenting himself as a moderate alternative to Benjamin Netanyahu with a message of unity at home, a search for peace and a tough line against the country’s many enemies.

Gantz, a tall, telegenic ex-general with salty hair, delivered his keynote speech to an ecstatic crowd of thousands of people. His speech included gestures to Israel’s many interest groups — religious and secular, right wing and left wing, Arab and Jew — as well as repeated jabs at Netanyahu, who is facing the possibility of indictment in a series of corruption scandals.

“No Israeli leader is a king,” he said to wild applause, adding that Netanyahu could not continue to serve if indicted. Thanking Netanyahu for his past decade in office, Gantz said: “We’ll take it from here.”

The political newcomer has emerged as the most serious challenger to Netanyahu’s lengthy rule, highlighting how security rules supreme in the minds of most Israeli voters. Gantz is still untarnished by partisan politics and has been riding a wave of popularity, even while saying little and presenting a vague platform.

But the shine could quickly wear off following Tuesday’s speech. Netanyahu took to Twitter to brand Gantz as weak. “Whoever says they are not right and not left — is left,” he said.

For many voters weary of Netanyahu’s long rule, Gantz’s fresh face is enough of a draw, as evidenced by the crowd at Tuesday’s speech, which was repeatedly interrupted by boisterous applause.

In the speech, Gantz accused Netanyahu’s hard-line government of dividing the nation by inciting against its rivals and failing to address the high cost of living.

He also took aim at Netanyahu’s recent boasts of Israeli military action against Iran in neighboring Syria, saying: “Security is done in deeds, not in words.”

Gantz vowed to take a different approach toward the Palestinians, who Netanyahu has largely ignored while turning his focus toward Iran.

“The government I lead will strive toward peace and will not miss an opportunity to create a regional change,” Gantz said.

But he also vowed tough action against Israel’s foes, including Iran and the Hamas militant group in Gaza.

He also said that Israel would never leave the Golan Heights or the Jordan Valley, a large strategic area of the occupied West Bank sought by the Palestinians. Israel captured both areas, along with east Jerusalem, in the 1967 Mideast war.

He said Israel would continue to develop settlement blocs in the West Bank and maintain its control of Jerusalem. The Palestinians view the settlements as a major obstacle to peace and want east Jerusalem as their capital.

He promised to allow humanitarian aid to Gaza and assist in economic development. “But I won’t allow protection payments of money in suitcases,” he said, referring to Netanyahu’s agreement to allow Qatar to deliver tens of millions of dollars to Hamas in exchange for pledges of quiet.

Gantz made no mention of his own role in Gaza. Under his leadership, Israel fought a bruising 50-day war against Hamas militants that killed over 2,000 Palestinians and caused widespread destruction.

In one of the few political ads he has put out, he stressed how as military chief he pummeled Hamas in the 2014 Gaza war. The UN says over 1,400 Palestinian civilians were killed and war crimes may have been committed.

Most polls show Gantz’s new party, “Israel Resilience,” coming in second to Netanyahu’s Likud in a crowded field of contenders in the April 9 vote. A second-place finish would position Gantz for either a top Cabinet post in a Netanyahu-led coalition or to be a high-profile opposition leader.

Some polls have him almost even with Netanyahu as far as fitness to be prime minister. None of Netanyahu’s many other would-be challengers come close.

“The appeal of the generals is beyond rational, it is emotional,” said Amir Bar-Or, an expert on civil-military relations in Israel at Sapir College. “Everyone in Israel knowns that security comes first, so the only realistic alternative to Netanyahu is a military man.”

Israel has long been fascinated with iconic warrior-statesmen like Rabin, Moshe Dayan and Ariel Sharon. But their prominence in political life has withered in recent election cycles as the country has focused on a more civic agenda.

With Netanyahu seemingly unbeatable, and the country dealing with security challenges on its northern and southern borders, the 2019 election has seen a revival in generals jumping into politics.

In addition to Gantz and Yaalon, two other former military heads, and two other prominent ex-generals, are also considering political forays.

“It marks the return of the generals’ popularity,” said Yohanan Plesner, head of the non-partisan Israel Democracy Institute and a former lawmaker and military commando. “History teaches us that generals have the best chance of passing the test of public confidence.”

Even so, Gantz’s hope of hopping straight into the job of prime minister is unprecedented. Rabin, Barak and others had to work through the political party machinery for several years before coming to power.

Gantz, 59, was a paratrooper who rose up the ranks to head special operations units and other various commands before serving as military attache to the United States and ultimately becoming Israel’s 20th military chief from 2011-2015. His term was marked by two wars with Hamas in Gaza and a covert air campaign in Syria against Iranian arms shipments to Hezbollah guerrillas in Lebanon.