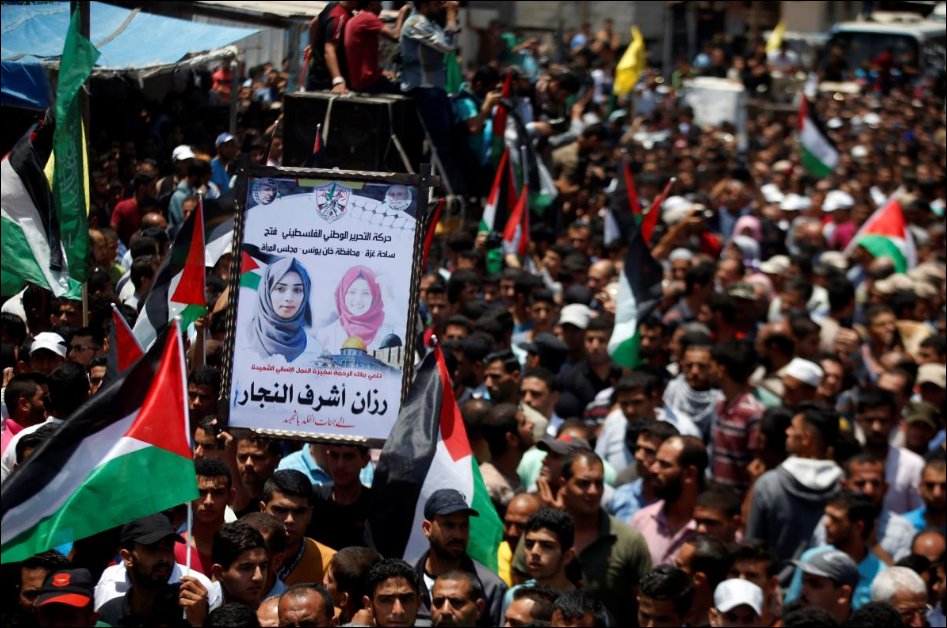 Mourners attend the funeral of Palestinian nurse Razan Al-Najar, who according to health officials and a witness was killed by Israeli forces as she tried to help a wounded protester at the Gaza border, in Khan Younis in the southern Gaza Strip June 2, 2018. (Photo: Reuters)

The Israeli military said on Saturday it was investigating the apparent killing by its troops of a Palestinian nurse on Friday during protests along the Gaza border.

Health officials and witnesses said Israeli forces shot dead 21-year-old Razan al-Najar, a volunteer medic, as she ran toward the border fence, east of the south Gaza city of Khan Younis, in a bid to reach a casualty.

The Israeli military said Palestinian militants had attacked its troops along the border with gunfire and a grenade.

In a written statement on Saturday, the military said it would investigate al-Najar’s death.

Thousands of people attended al-Najar’s funeral in Gaza on Saturday, including some she had treated when they were wounded at previous border protests. Her body was wrapped in a Palestinian flag and carried through the streets on a stretcher by mourners.

“With our souls and blood we redeem you martyr Razan,” cried mourners as the body was brought to her home for a last farewell before burial.

Residents said al-Najar was a popular figure at the protest sites and pictures depicting her as an angel circulated on Palestinian social media.

Her death brought to 119 the number of Palestinians killed in weekly demonstrations launched on March 30 in the Gaza Strip, an enclave controlled by the Islamist group Hamas and long subject to grinding Israeli and Egyptian embargoes.

“#Israel needs to calibrate its use of force and Hamas need to prevent incidents at the fence. Escalation only costs more lives,” he added.

Israel has drawn international condemnation for its use of deadly force during the mass demonstrations. It says many of those killed were Hamas members and militants trying to launch attacks under cover of the protests.

The Palestinians say most of the dead and the thousands wounded were unarmed civilians against whom Israel was using excessive force.

The Israeli military said in its statement: “The IDF (Israel Defence Forces) constantly works to draw operational lessons and reduce the number of casualties in the area of the Gaza Strip security fence. Unfortunately, the Hamas terror organization deliberately and methodically places civilians in danger.”

On Friday the United States, Israel’s ally, vetoed a Kuwaiti-drafted UN Security Council resolution that condemned Israel’s use of force against Palestinian civilians.

Later, a second, US-drafted resolution that blamed Hamas for the violence and upheld Israel’s right to defend itself failed to attract any other country’s support when it was put to vote in the 15-member council.

The protests, dubbed the “Great March of Return” have seen thousands gather to demand the right of return to their families’ lost homes or lands, now in Israel.

Israel rules that out, concerned it would lose its Jewish majority. Two-thirds of the two million Palestinians in Gaza are war refugees or their descendants.