JERUSALEM, Dec. 2 (Xinhua) -- Israeli lawmakers on Wednesday voted in a preliminary reading in favor of a bill to dissolve the parliament, amid a coalition crisis that could force an election within two years. 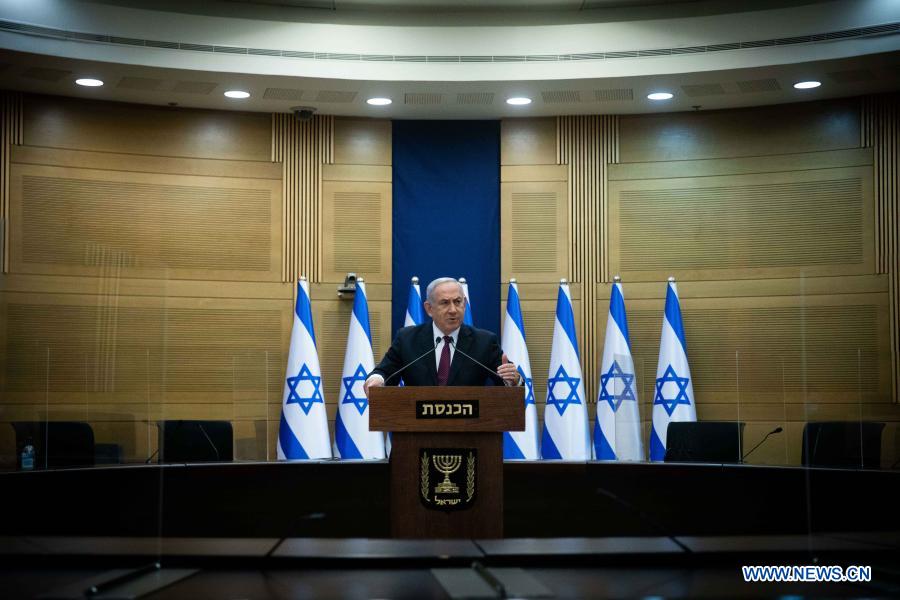 Israeli Prime Minister Benjamin Netanyahu delivers a statement at the Knesset, the Israeli parliament, in Jerusalem, on Dec. 2, 2020. Israeli lawmakers on Wednesday voted in a preliminary reading in favor of a bill to dissolve the parliament, amid a coalition crisis that could force an election within two years. (Yonatan Sindel/JINI via Xinhua)

The bill passed in 61-54 vote, meaning it still needs three more full rounds of votes in the parliament before its final approval.

Yair Lapid, who sponsored the bill and also chairman of the opposition and leader of the Yesh Atid party, wrote in a tweet that the vote was "the first step towards a different government."

The opposition garnered enough votes for the bill to pass its first hurdle after leader of the Blue and White party Benny Gantz, Prime Minister Benjamin Netanyahu's main coalition partner, decided to support the move.

On Tuesday, Gantz accused Netanyahu of "lying" to the public and said he had lost hope that their power-sharing government could function properly.

Speaking in a televised press conference, Gantz said he will withdraw his support of the bill only if Netanyahu agrees to approve the state budget immediately.

Under a deal signed by Netanyahu and Gantz in May to form the coalition government, the state budget for 2020-2021 should have been approved by August 2020.

Shortly before Gantz's statement, Netanyahu issued video footage on Twitter, urging Gantz to vote against the bill. "Now is not the time for elections," Netanyahu said, "it's the time for unity."

The opposition has accused Netanyahu of not passing the state budget as a tactic to ensure that he will not have to rotate his position as prime minister with Gantz, as required by their power-sharing agreement.

Netanyahu is facing weekly protests throughout the country, which are calling him to resign over his handling of the coronavirus crisis and his criminal trial. The trial, in which the long-time leader is charged with bribery, fraud and breach of trust in three separate cases, is scheduled to resume in January 2021.