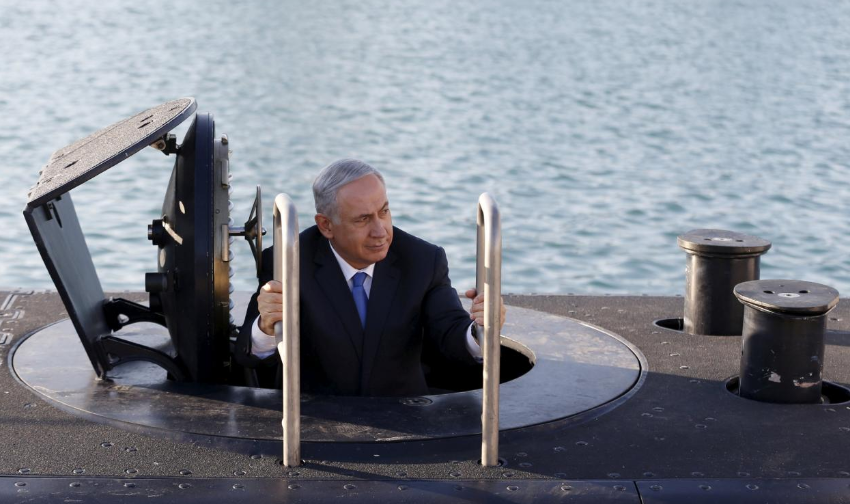 Israeli Prime Minister Benjamin Netanyahu climbs out after a visit inside the Rahav, the fifth submarine in the Israeli Navy's fleet, after it arrived in Haifa port January 12, 2016 (Photo: Reuters)

Prime Minister Benjamin Netanyahu was questioned by Israeli police on Tuesday for the first time in an investigation into a $2 billion deal over the sale of German Thyssenkrupp submarines to Israel, but is not a suspect, police said.

The deal for three submarines and four patrol vessels has been the subject of a corruption investigation since late 2016 after Israel’s Channel 10 TV reported that Netanyahu’s personal lawyer also represented the local agent of Thyssenkrupp Marine Systems, raising concerns of a conflict of interest.

The attorney, David Shimron, has denied wrongdoing and said he never discussed the deal with Netanyahu, a distant relation.

“The prime minister gave testimony in Case 3000, the submarines case, for the first time. He is not a suspect,” police spokesman Micky Rosenfeld said.

In a text message, a spokesman for Netanyahu said that the prime minister “detailed the entire professional considerations that guided him in his decisions regarding the submarines and vessels and their importance for the security of the state”.

In November, police investigating the submarine case questioned a Netanyahu confidant, Yitzhak Molcho, an attorney who has doubled as the premier’s envoy in negotiations with the United States, Egypt and the Palestinians. He denies wrongdoing.

Netanyahu has been named as a suspect in three other corruption probes — cases 1000, 2000 and 4000. In February, police recommended charging him with bribery in the first two.

Israel’s attorney-general is still weighing whether to indict Netanyahu, who has denied committing any crimes, and the decision could take months.

In Case 1000, he is suspected of bribery over gifts from wealthy businessmen, which police say were worth nearly $300,000. Case 2000 involves an alleged attempt by Netanyahu to win positive coverage in Israel’s biggest newspaper by offering to take measures to curtail circulation of a rival daily.

In Case 4000, Netanyahu has been questioned over allegations he awarded regulatory favors to a telecoms firm in return for favorable coverage on a news site the company’s owner controls.

Despite the probes, opinion polls have shown the right-wing leader’s popularity has risen in recent weeks, a reflection of his tough security policies, U.S. withdrawal from the Iran nuclear deal he opposes and the opening of the American Embassy in contested Jerusalem, a move Netanyahu had advocated.