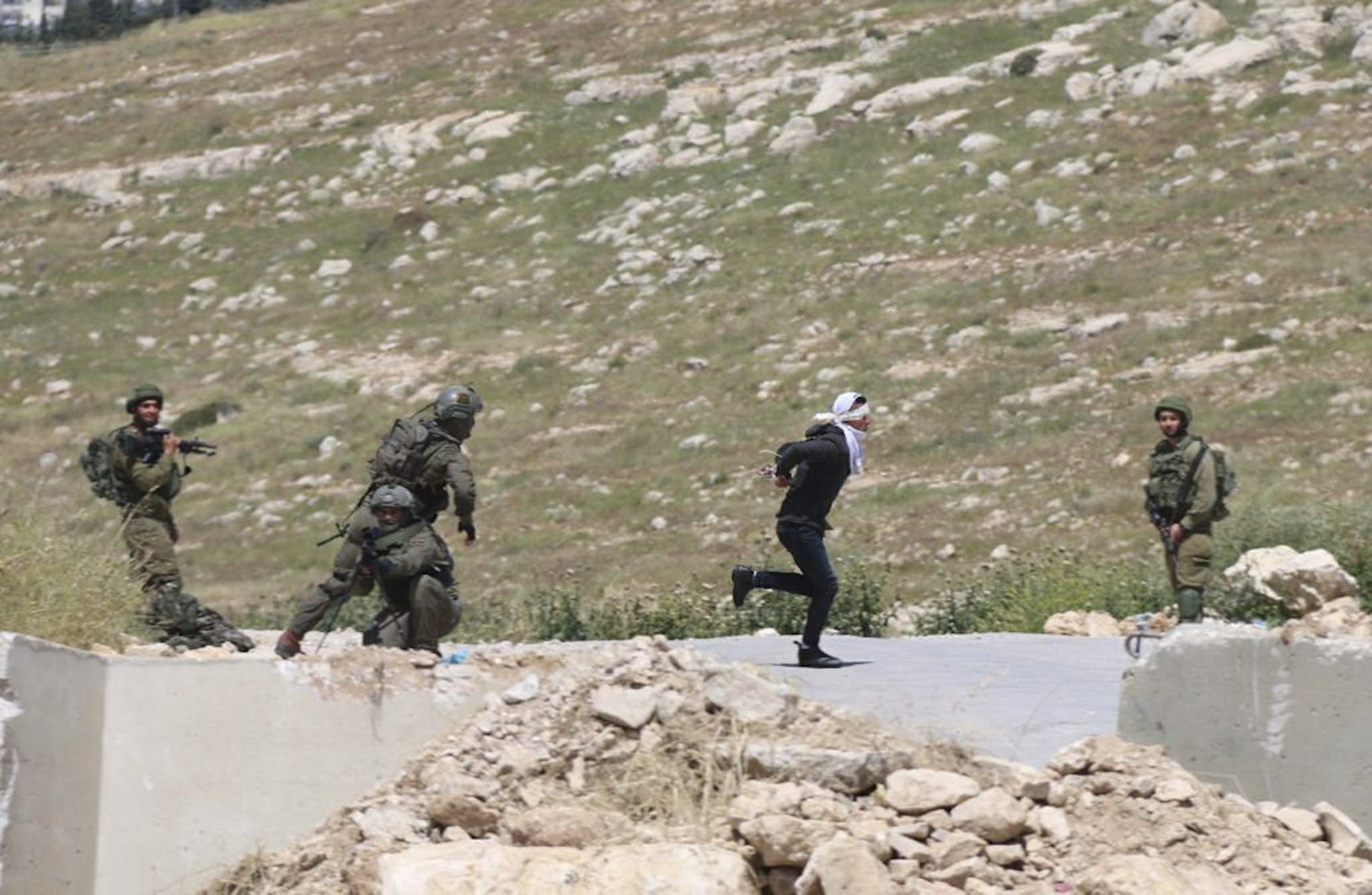 In this Thursday, Apri 18, 2019 photo, handcuffed and blindfolded Osama Hajahjeh, 16, runs away from Israeli soldiers near the village of Tekoa, West Bank. (Photo: AP)

The military said it was investigating last week’s incident, which it said took place as Palestinian youths were throwing stones at Israeli soldiers.

Osama Hajahjeh, 16, said he was trying to run from soldiers when he was shot Thursday. He said the incident began after a funeral for a school teacher in his village of Tekoa, who had been hit by a car driven by an Israeli while walking at a busy intersection.

Hajahjeh said school was let out early for students to attend the funeral. After the burial, he said he was tackled by a soldier who jumped out of an olive grove and forced him to the ground. He said his hands were cuffed and his eyes covered with a cloth blindfold.

After the arrest, he said he could hear Palestinian youths shouting at the soldiers, while soldiers yelled back in Arabic and Hebrew.

“I got confused” and stood up, he said. “Immediately, I was shot in my right leg. Then I tried to run, and I was shot in my left leg and fell on the ground,” he said, speaking from his hospital bed in the West Bank town of Beit Jala south of Jerusalem. Doctors said he is in stable condition.

A photo captured by a local photographer shows soldiers appearing to pursue a fleeing Hajahjeh with his eyes covered and hands tied behind his back.

The shooting set off a chaotic scene. Soldiers and Palestinians shouted at each other as the teen lay on the ground. One soldier took off the teen’s belt and used it as a tourniquet to stop the bleeding.

Amateur video shows a masked soldier screaming and pointing a pistol at a group of anguished Palestinians as the teen lies on the ground. Later, a soldier scuffles with residents as another soldier fires into the air. A soldier and two Palestinian men then carry away the teen to medical care.

In a statement, the military said the teen had been arrested after participating in “massive stone throwing” at Israeli forces.

“The detainee was held at a nearby spot and began running away from the force. The soldiers chased him, during which they fired toward his lower abdomen,” it said.

The statement did not say anything about him being blindfolded or cuffed, but said the military offered medical treatment after the shooting and was investigating the event.

Hajahjeh’s father, Ali, said he was thankful a soldier gave his son medical care. But he said his son never should have been shot to begin with.

“Only a sick person would shoot a blindfolded boy,” he said.

The Israeli human rights group B’Tselem said the incident was the latest in a series of what it called unjustified shootings on Palestinian teens and young men. It says four Palestinians in their late teens or early twenties have been killed in the West Bank since early March.

The army has challenged the Palestinian witness accounts, but also frequently announces investigations into disputed cases.

“Like the previous four cases we investigated, this is an example of Israel’s reckless use of lethal fire, and the fact that the human lives of Palestinians count very little in the eyes of the army,” said Roy Yellin, a spokesman for the group.