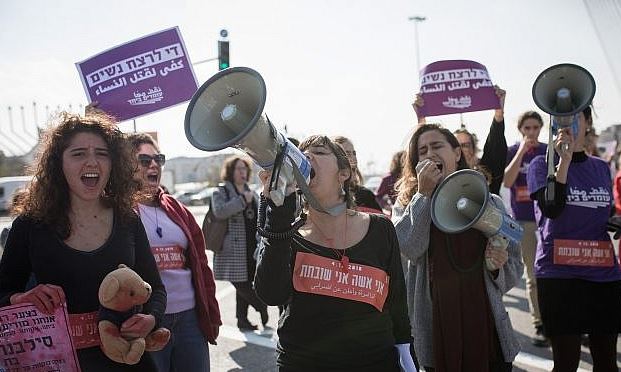 JERUSALEM, Dec. 4 (Xinhua) -- Women in Israel launched on Tuesday a nationwide strike to protest against violence toward women.

The strike was triggered by the killing of two girls last week, bringing the death toll of women and girls in Israel to 24 this year.

The so-called "Red Flag" partnership of 50 female groups organized the strike. They expressed demands for the government to allocate 250 million new shekels (about $67 million) for five years to tackle violence against women.

Local media reported that women across the country stayed at home off work or participated in a series of protests throughout the day.

More than 300 large companies and public bodies announced their support in the struggle and said they will allow their female and male employees to strike.

In the morning, rallies were held in dozens of major crossroads and highways, including at the entrance to Jerusalem. Some of the roads were painted with red paint to symbolize the blood of the victims.

Later on Tuesday, tens of thousands of women are expected to participate in a rally in Rabin Square in central Tel Aviv.

"The horrible murders of two young women last week,16-year-old Yara Ayoub, and 13-year-old Silvana Tsegai, forced us to the streets," the organizers said in a statement.

"We are striking because decision-makers must realize that actions are required, not empty words," they added.