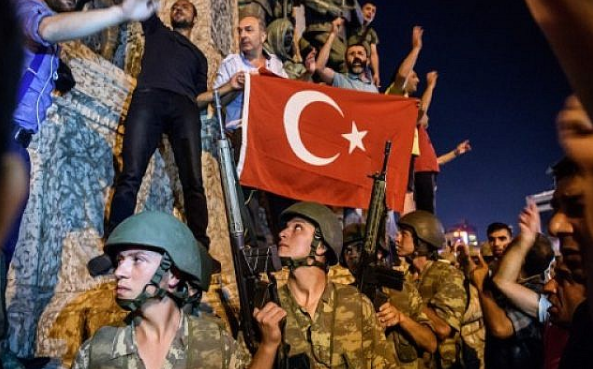 Turkish soldiers stand in Taksim Square in Istanbul as people protest against the military coup on July 16, 2016. (Photo: AFP)

ISTANBUL (Xinhua) -- Turkish prosecutors revealed some alleged links by 43 polling station officials in Istanbul to a group accused of orchestrating a coup attempt in 2016, local media reported on Sunday.

The prosecutors launched last week 32 investigations into suspected irregularities in municipal elections in Istanbul and decided to summon around 100 polling station officials for questioning.

According to the state-run Anadolu Agency, two of the suspects allegedly contacted with the network headed by U.S.-based Turkish cleric Fethullah Gulen via an encrypted mobile phone application.

The others were found to have deposited money into an account of Gulen in Bank Asya, whose banking operations were suspended in the country over the failed putsch in July 2016, in which 250 people were killed.

Ekrem Imamoglu, the candidate for the main opposition Republican People's Party, was certified as the mayor of Istanbul on April 17, as he won a narrow victory against his rival Binali Yildirim from the ruling Justice and Development Party in local elections held on March 31.

The ruling party, however, rejected the results and asked for a complete re-run of the election in the city over what it calls "irregularities and mistakes" detected during the votes.

Turkey's top electoral board is expected to make its final decision on Monday, according to media reports.