WORLD It'll be all white: US scientists create albino lizards with gene-editing tech

It'll be all white: US scientists create albino lizards with gene-editing tech

A team of scientists at the University of Georgia has succeeded in gene-editing reptiles for the first time, creating a pair of albino lizards the size of a human index finger. 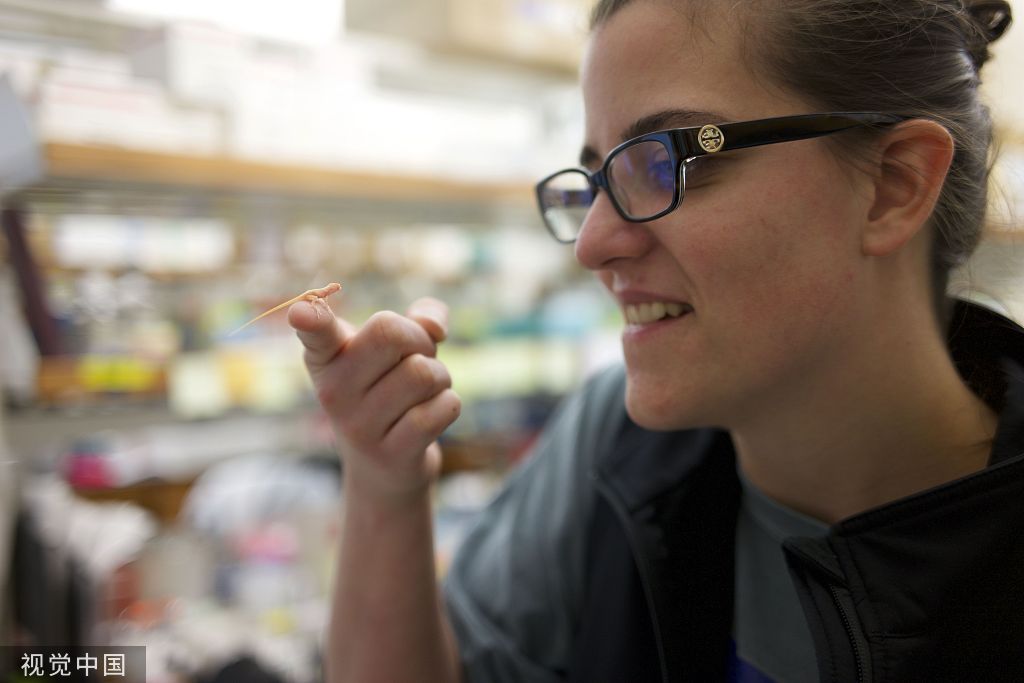 Ashley Rasys, a doctoral student, holds one of the albino lizards on her fingertip in this undated handout photograph. (Photo: VCG)

In a paper describing the breakthrough in the journal Cell Press on Tuesday, the researchers said the lizards could help us better understand vision problems in humans with albinism.

The powerful gene-editing technology, known as CRISPR, has led to big breakthroughs in mice, plants and humans, but getting it to work with reptiles has been more difficult because of key reproductive differences.

"For quite some time, we've been wrestling with how to modify reptile genomes and manipulate genes in reptiles, but we've been stuck in the mode of how gene editing is being done in the major model systems" said Doug Menke, co-author of a paper wrote in Cell Press.

CRISPR gene-editing is usually performed on freshly fertilized eggs or single-cell zygotes, but the technique is difficult to apply to egg-laying animals.

After fertilization, millions of cells will have already grown, and trying to penetrate the leathery, flexible shell at that stage may kill the embryo, Menke said.

The alternative is to perform the technique before fertilization, but injecting the CRISPR reagents too early will mean they're wasted.

That leaves a narrow time window but because sperm gets stored for a long time inside the oviducts of females, it is difficult to guess when fertilization occurs.

However, the transparent membrane over the ovary allowed the scientists to see which eggs to be fertilized next, and injected the CRISPR reagents into them just beforehand.

The successful gene-edits ended up in both the maternal-line and paternal DNA, not just the former predicted.

Why the choice of albino lizards?

The most obvious reason, said Menke, was to prove their technique had been successful.

Second, knocking out the tyrosinase gene, which results in albinism, is not lethal to the animal.

Finally, humans with albinism often have problems with their vision, and researchers can use the index-finger-sized lizards as a model to study how the edited gene impacts the development of the retina.

"There's a structure in the human eye called the fovea, this kind of pit-like structure really important for high acuity vision, and the major animals used for biomedical research, like mice, don't have it," said Menke.

"So we wanted to develop a new animal model to study fovea defects, and it turns out these lizards need high acuity vision, because when they hunt insects, they have fovea in their eyes."

The team said the technique could also be applied to birds, which have been gene-edited in the past but using more complex processes.