WORLD It's cherry blossom season, but DC isn't ready to open up

It's cherry blossom season, but DC isn't ready to open up

Officials in the nation's capital are watching the crowds as cherry blossom season begins in earnest. 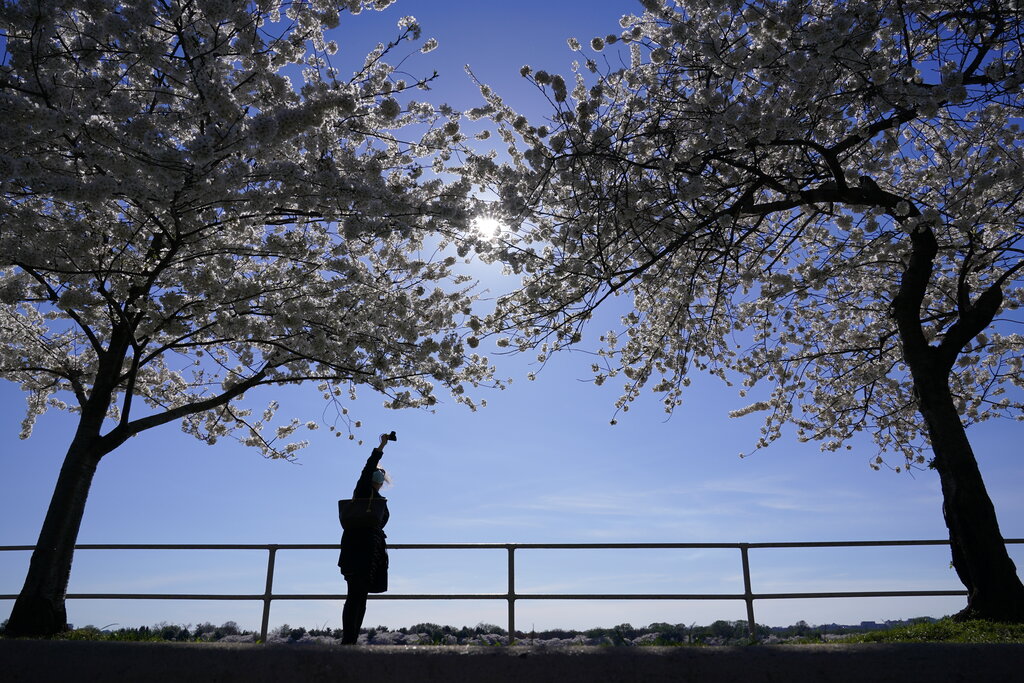 A person photographs Yoshino cherry trees that are in full bloom around the Tidal Basin in Washington, Tuesday, March 30, 2021. (Photo: AP)

The distinctive white and pink petals reached full bloom last Sunday, about a week earlier than expected. It's an event that normally brings in thousands of visitors and signals the unofficial start of D.C.'s peak tourist and convention season.

But Washington remains largely locked down because of the coronavirus pandemic, with limitations on outdoor gatherings and Smithsonian museums and galleries and its National Zoo shuttered.

“We’re starting to open slowly,” said Cherry Blossom Festival President Diana Mayhew. “We really hope that people are being smart. We’ve all gone through enough this past year that we don’t want to revert back.”

The National Park Service stands poised to limit access to the Tidal Basin and its high concentration of cherry blossom trees if the crowds there grow too thick.

Park Service spokesman Mike Litterst said local virus metrics have been encouraging, but vigilance was still the order of the day.

“The numbers have all been moving in the right direction for the last couple of months, but the last thing we want to do is let our guard down, have enormous crowds at the Tidal Basin, and then all of a sudden start to see things swing back up again,” he said.

Litterst said that so far the crowds have been manageable and well-behaved. But the park service will be watching the area around the Jefferson Memorial to make sure no choke points are forming and social distancing can be maintained.

“Cherry blossom season is our Super Bowl. We take care of these trees all year long. We plan events with our partners. We get ready, and to show off those 3,700 trees every year is the highlight of our year,” Litterst said. “So to not have that opportunity for a second year in a row is certainly heartbreaking, it’s bittersweet. But again, we are confident in our decision, knowing that we are doing the right thing to help us long-term get out of this pandemic.”

Last year's cherry blossom preparations fell under the looming shadow of the fast-advancing pandemic threat, with organizers holding optimistic press conferences even as it became increasingly clear the show would not go on. D.C. Mayor Muriel Bowser declared a state of emergency on March 11, 2020, nine days before the Cherry Blossom Festival's start date.

Officials like Litterst, Mayhew and others had to abruptly shift as many events as possible online while openly warning people to stay away. This year, festival organizers say they've had time to prepare; in addition to encouraging enthusiasts to check out the bloom-cam livestream, they've been planning a host of what Mayhew called “hybrid programming where people can have a personal experience and really get involved in the festival.”

For example: Officials have commissioned 26 sculptures depicting giant cherry blossom flowers, large enough to sit on and painted by local artists, around the city. Residents are encouraged to track down all 26, scattered around all eight wards of the city, and post the photos on social media.

The festival is also sponsoring what it calls a Petal Porch Parade, encouraging residents of D.C., southern Maryland and northern Virginia to decorate their porches in cherry blossoms, then mark the site on a virtual map that people can incorporate into their own bicycle or walking tours.

“We are working very hard to make sure that is not an all-virtual festival,” Mayhew said. “The community IS the festival this year.”