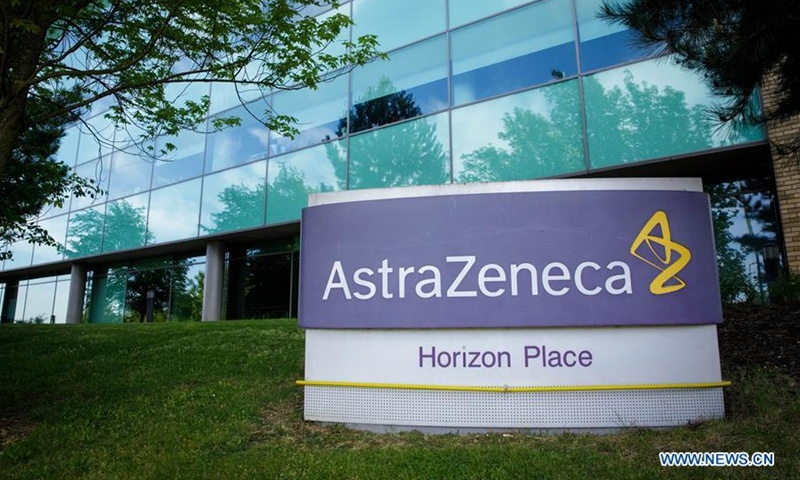 Photo taken on May 18, 2020 shows a logo in front of AstraZeneca's building in Luton, Britain. AstraZeneca, which is developing a possible vaccine against COVID-19 in partnership with the University of Oxford, on Wednesday put on hold the phase-3 trial of its vaccine following an unexplained illness in one trial participant in Britain. (Photo: Xinhua)

Germany, France, Italy, and Spain on Monday said they would temporarily suspend the use of the AstraZeneca COVID-19 vaccine because serious blood clots detected in some people were linked with their vaccination in terms of timing. These countries said they will wait for the evaluation from the European Medicines Agency (EMA). According to the Sky News, EMA executive director Emer Cookesaid on Tuesday that "there is no indication that the vaccination had caused these conditions [blood clots]." Cooke said EMA was expected to complete its review on Thursday.

There have been various cases in which vaccines were suspected of being responsible for serious accidents. But the link between vaccines and those accidents have not been confirmed. Such coincidence has sparked controversy. Generally, information about those accidents has increased people's suspicion over the reliability of vaccines.

Some officials and scholars who defend the AstraZeneca vaccine said that the inoculation of the AstraZeneca vaccine has more advantages than disadvantages. They believe the vaccination can save more people's lives - although a few people may suffer serious side effects or even die due to it, such a cost is acceptable from the perspective of saving the entire society. Such a broad perspective is clearly in consistent with the principle of public health

But to individuals, if blood clots are linked to the inoculation of AstraZeneca vaccine - even though the cases might be isolated - they will have to face a sharp increase of individual risk. As the infection rate of COVID-19 is not high, and the death rate among the infected people is even low, it will become a predicament for people to determine whether they will be safer to take the AstraZeneca vaccine.

At least 18 European countries have suspended the use of the AstraZeneca vaccine, with Indonesia in Asia making the same decision. More countries may join in. This will strike a heavy blow to AstraZeneca's credibility. Currently, the UK, where AstraZeneca is based, continue to use the vaccine produced by the company and Australia are standing by the vaccine, and so is the island of Taiwan.

Objectively, the pandemic surged fiercely, and the development and clinical trials of the vaccines were generally rushed. The approval of these vaccines by countries was somewhat an emergency measure. Drug makers and authorities have finished their due procedures, and the reliability of vaccines will be tested during the following vaccinations.

AstraZeneca vaccines were suspected of having problems during its promotion and use, which shaked the general public's confidence. The COVID-19 pandemic is continuing and the virus is mutating. Various kinds of vaccines are also undergoing long-term competition on their reliability. Not causing serious side effects is only one aspect. With the gradual popularization of vaccination, the more effective vaccine will emerge, and the results may be different from what was initially reported.

Judging from the current situation, the prospects of several Chinese-made COVID-19 vaccines are still pretty good. The total numbers of vaccination using Sinopharm and Sinovac vaccines outside China has reached tens of millions of doses, and their scope and distribution worldwide is the widest. There's no way that China can influence other countries' public opinion, and Western media have been following closely Chinese vaccines. But so far, there has been least negative information about Chinese vaccines.

This at least shows that the safety of Chinese vaccines has been tested in practice. Their performance is higher than that of Pfizer and AstraZeneca, two major COVID-19 vaccines in the West. More time is needed to see whether vaccinated people will get infected with the COVID-19. Western vaccines have the data advantages provided by pharmaceutical companies, but the data have to be verified with massive vaccination.

The comprehensive reliability of the COVID-19 vaccines is the touchstone of the dependability of a country's public health system. China has conditionally introduced the COVID-19 vaccines - first applying to those aged between 18 and 59 years old, then expanding to senior citizens under 70 years old in some regions. Instead of claiming this reflects the low reliability of Chinese vaccines, it is better to say that this reflects the Chinese government's high sense of responsibility. The reliability of China as a country remains the same no matter whether it was about the fight against the COVID-19 before the emergence of the vaccines or after the vaccination.