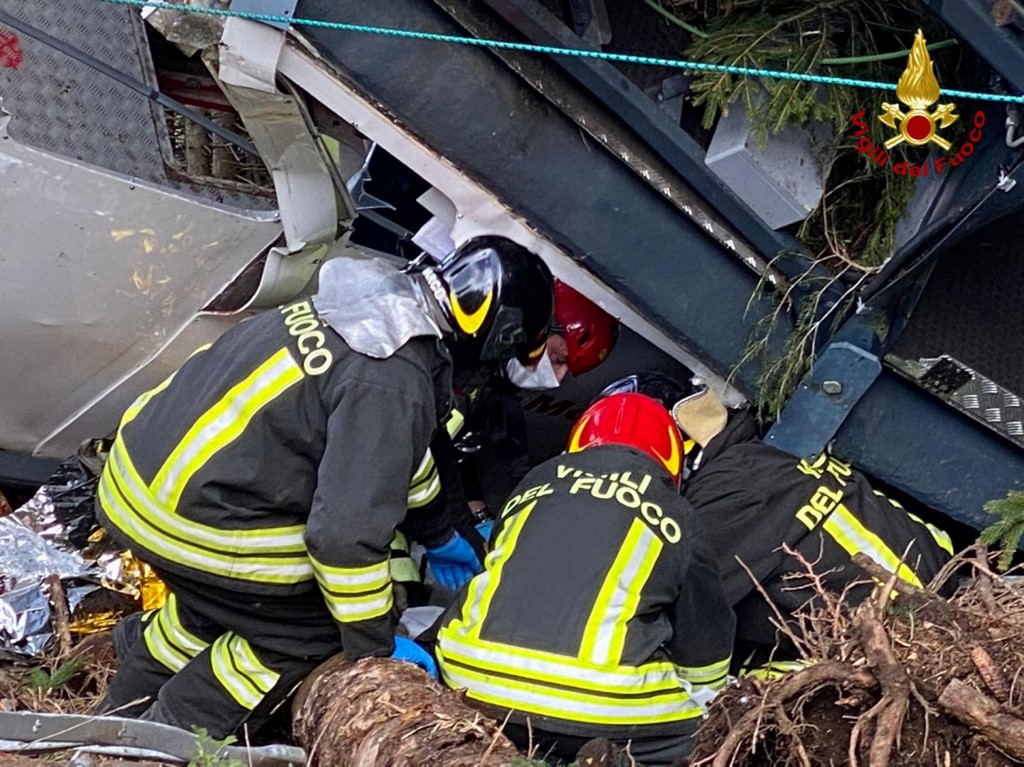 A photo taken and handout on May 23, 2021 by The Italian Firefighters "Vigili del Fuoco" shows rescuers by a cable car that crashed to the ground in the resort town of Stresa on the shores of Lake Maggiore in the Piedmont region.(Photo: AFP)

Thirteen people died and two children were seriously injured Sunday when a cable car slammed into the side of a mountain in northern Italy, emergency services said.

The toll could rise further from the accident in Stresa, a resort town on the shores of Lake Maggiore in Italy's Piedmont region, the Alpine rescue service said on Twitter.

A spokesman said two children aged nine and five had been seriously injured and taken by helicopter to a paediatric hospital in Turin.

A statement by Prime Minister Mario Draghi expressed his "profound grief" and offered his condolences to the victim's families.

The 20-minute cable car ride, popular with tourists, links Stresa with the 1,500-metre (4,900-foot) summit of the Mottarone mountain, and offers spectacular views of the Alps.

The ministry of infrastructure said in a statement that the accident occurred around 12:30 pm (1030 GMT) as the cabin, with 11 people aboard, was about 100 metres (yards) from the summit.

The ministry said the accident appeared to have been caused by a ruptured cable near the top of the route.

Regional president Alberto Cirio said he was "devastated" at what he termed "an enormous tragedy which takes our breath away."

Giovanni Toti, president of the neighbouring region of Liguria, noted that the tragedy had occurred just as Italy was emerging from months of Covid-related restrictions. Sunday, he said, was supposed to have been "a day of re-opening rich in hope."

European Council President Charles Michel offered a tweet in Italian expressing his "most sincere condolences to the families and friends who have lost a loved one in this tragic accident."

Fire service images showed debris from the white and red cabin in a steep wooded area where access appeared difficult.

The cable car was closed between 2014 and 2016 for maintenance work.

Europe has seen a number of similar cable car accidents over the past 50 years.

Nine German skiers were killed on September 5, 2005, when an 800 kilo (1,760 lb) concrete block fell from a helicopter transporting it near the popular Austrian Tyrol resort of Soelden onto a cable carrying their cabin.

In February 1998, a low-flying US military jet severed a cable at Cavalese, a ski resort in Italy's Dolomites, killing 20 people.

Cavalese was also the scene of a 1976 disaster when a steel supporting cable broke, killing 42 people.