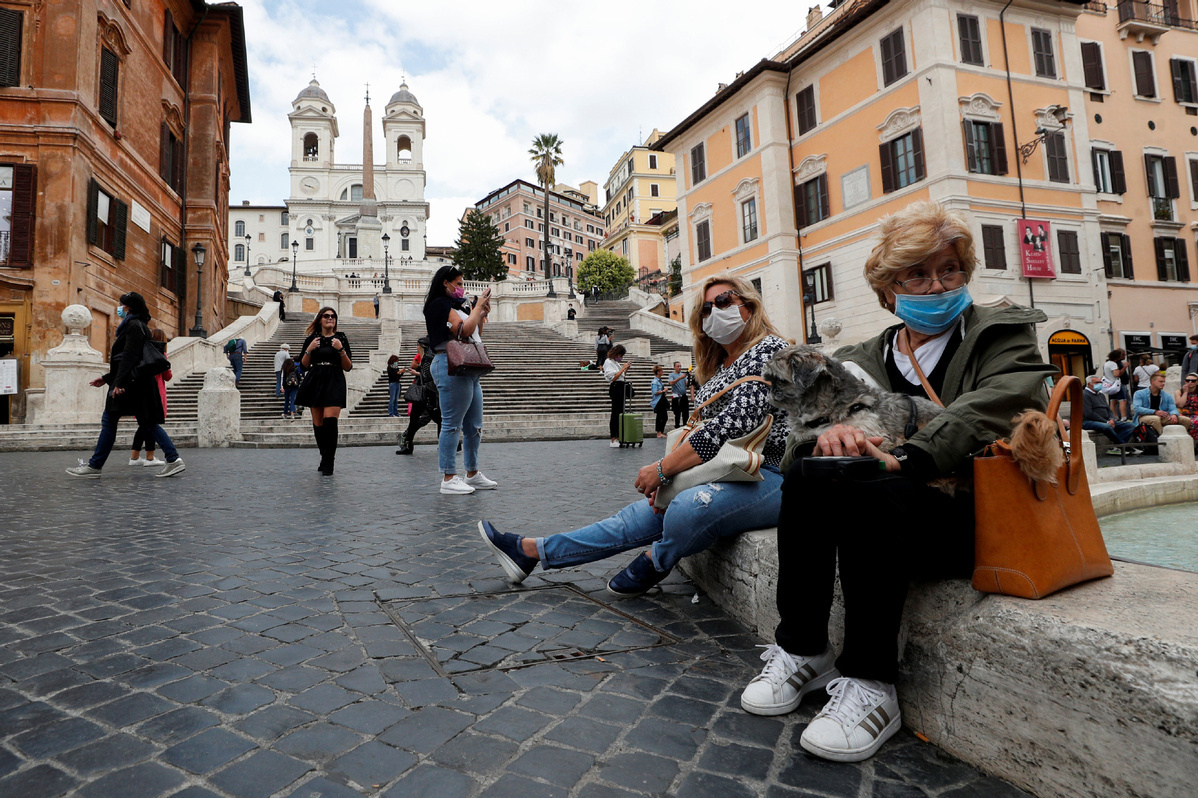 Women wearing face masks sit next to the Spanish Steps, as local authorities in the Italian capital Rome order face coverings to be worn at all times out of doors in an effort to counter rising coronavirus disease (COVID-19) infections, in Rome, Italy, Oct 2, 2020. (Photo: Agencies)

Italian capital is taking aggressive steps against the COVID-19 pandemic, including the deployment of police on streets of Rome to enforce the implementation of hygiene rules.

Despite being Italy's largest city, Rome was largely spared during the first wave of the coronavirus pandemic in Italy, which was concentrated in the densely populated and industrialized northern part of the country. But on Saturday, the city of nearly 4.3 million inhabitants, recorded 182 new coronavirus infections, according to the regional health data, the 44th consecutive day with at least 100.

Before the start of that period, on Aug 20, the city had only topped that figure once since April 4, a span that included 22 days with only a single-digit infection rate. Rome is now recording more new coronavirus cases than Milan, the one-time epicenter of the pandemic, which recorded 101 new cases on Saturday.

For all of Lazio -- the region that includes Rome, the data tells a similar story: from infection rates of fewer than 30 people a day from late May to early August, numbers have spiked to more than 200 a day starting in the final days of August.

National, regional, and municipal health officials are taking the threat of a flair up seriously. As of Saturday, residents of Lazio -- the region that includes Rome -- are required to wear masks at all times, even when they are outside and far from anyone else (exceptions only allowed for those with certain medical problems, children under the age of 6, and people who are exercising).

At least three smaller Italian regions -- Campania, which includes the city of Naples; the island region of Sicily; and Basilicata, the arch of Italy's boot-shaped peninsula -- have issued similar mask laws.

Italian Prime Minister Giuseppe Conte has repeatedly vowed not to issue another national coronavirus lockdown. But according to Lazio News, regional health officials on Friday were given the right to lock down specific neighborhoods or towns if there is a rise in infections there.

Several Italian media reports indicate that more than 800 additional police were posted to the streets of Rome to enforce the new rules. Police reportedly issues warnings to rule-breakers on Saturday, and abuses could result in fines of up to 400 euros ($470). Local television channel 10 said that more than 3,000 police controls had been carried out in Rome Saturday morning alone.

Most local news reports on Tuesday focused on the police controls, with Il Messaggero and La Repubblica, the two popular Rome-based daily newspapers, reporting some fines were levied.

Officials managing outdoor markets, shops, restaurants, and other locals were ordered to take temperature of anyone entering these places and to keep those showing even a slight fever out. That rule has remained on the books from the point when the country's national coronavirus lockdown was eased starting in May, but news reports said they had been only loosely enforced as infection rates dropped.

According to the news site Roma Today, Rome Mayor Virginia Raggi unveiled a plan to create a kind of guarantee -- called "Rome Safe Tourism" certificate on Friday, for restaurants and bars that have followed the best practices for coronavirus health rules.

Lazio is also launching an initiative starting Monday to incentivize people to vaccinate themselves against the regular flu based on worries that a high number of flu patients could complicate the treatment of COVID-19 patients.