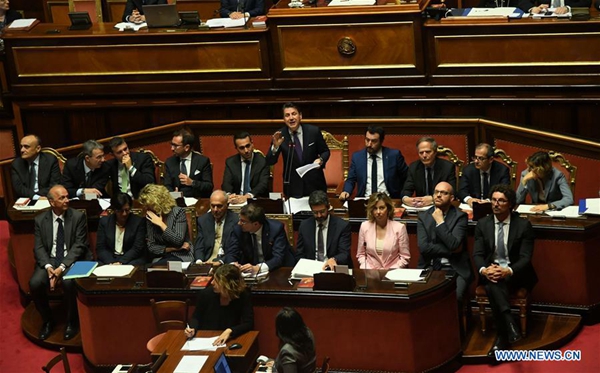 Nearly nine hours after debate started, Italy's Senate, the upper house of parliament, backed Conte's government by a vote of 171-117, mostly along party lines. A total of 25 senators abstained from voting. The outcome was widely expected.

Conte, a 53-year-old political novice, who was formally installed as the head of Italy's government on June 1, would have had to resign if he lost the vote.

Conte will face a similar confidence vote in the lower house of parliament, the Chamber of Deputies, on Wednesday. A positive outcome there is even more assured because of in that chamber the strength of the Five-Star Movement and the League, the two parties that support his government.

Conte addressed senators for more than an hour ahead of a full day of statements, the prime minister's first formal audience in the Senate. Conte thanked Italians for the chance to serve as prime minister.

He said he would take on the new job "with humility, with determination, with an awareness for (his) limits, but also with passion."

But in the end, Conte earned more than enough votes to keep the job he has held for just four days.

In his remarks, Conte mostly stayed away from the most controversial issues backed by the Five-Star Movement's Luigi Di Maio and Matteo Salvini from the League, Conte's two deputy premiers who sat on either side of Conte as he spoke.

Di Maio and Salvini campaigned against the European Union (EU) and Italy's obligations to the North Atlantic Treaty Organization (NATO). But Conte called the EU "our home," and said Italy would remain a dedicated member of NATO, with the United States remaining "a privileged ally."

Conte did call for Europe to become more egalitarian in order to "prevent its decline" and said governments should "rethink" sanctions against Russia.

Conte did not discuss the controversial doubts the Five-Star Movement and the League have expressed about the euro currency, or about the 100-billion-euro (120-billion-U.S.-dollar) spending plan that is seen as deepening the debt for Italy's cash-strapped government.

Instead, Conte said he wanted to reduce the country's 2.2 trillion euros (2.6 trillion U.S. dollars) in debt, though he wanted to pay it down "by growing wealth and not with austerity measures."