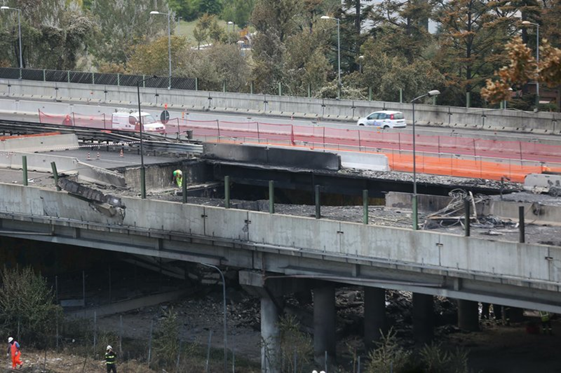 Italy’s prime minister visited people who were injured when a truck carrying highly flammable gas crashed and exploded on a highway near Bologna, saying Tuesday it was important to understand what happened to prevent future tragedies.

Prosecutors have opened an investigation of Monday’s accident, which was triggered when the tanker truck hauling liquefied petroleum gas, or LPG, rammed a truck stuck in a line of traffic. The tanker caught fire and then exploded, shooting a fireball across the raised highway’s eight lanes and collapsing part of it.

The tanker truck’s driver was killed, but two highway patrolmen were credited with preventing more deaths by clearing the road of startled and curious motorists in the minutes between the collision and the blast.

“The road was full of people outside of their vehicles that were making videos. There were two or three kilometers full of cars,” patrolman Giacomo Chiriatti told Italian news channel Sky TG24. “In six, seven minutes, eight, we managed to get all of the cars out of the way. After that, there was a great big explosion, as if from a film about Hiroshima and the atomic bomb.”

Highway police said only the tanker driver died in the crash, revising earlier reports by the Italian carabinieri that the accident caused two fatalities. The driver was identified as 41-year-old Andrea Anziolin, of the northern Italian city of Vicenza.

“Maybe it was a moment of distraction or a wave of sleepiness” that caused Anziolin to rear-end the truck, Bologna prosecutor Giuseppe Amato told Italy’s RAI radio. “But it is too early to say with certainty.”

The accident injured dozens of people. Some had burns, while others were cut by flying glass from the windows of nearby buildings that shattered during powerful secondary explosions.

The ones hurt by glass included 11 carabinieri from a barracks near the blast site who were preparing to respond to the accident, officials said.

Doctors said 120 people were treated and 18 were hospitalized for injuries that included severe burns. Ten patients were being treated in a plastic surgery ward, four in burn units.

“I am here today to demonstrate the closeness of the government to the people who are suffering, but also to understand why so that these things are not repeated,” Italian Premier Giuseppe Conte said during his trip to visit accident victims Tuesday.

Conte travelled later to the southern region of Puglia, where a van packed with immigrant farmworkers overturned Monday after colliding with a truck carrying tomatoes, killing 12. It was the second such fatal accident in the area in the space of three days. 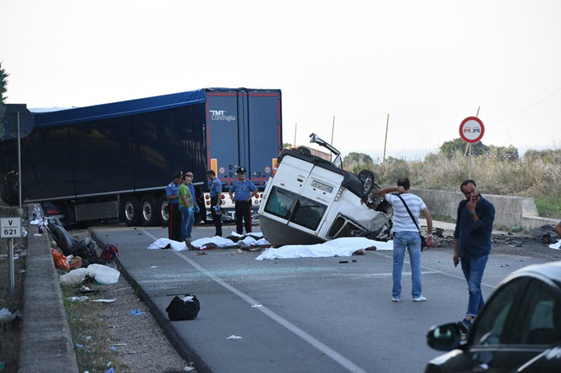 Bodies from the crash in the Puglia region are covered with sheets. (Photo: AP)

Interior Minister Matteo Salvini beat the premier there, pledging to crack down on immigrants working illegally in Italy.

“The fight against the mafia and exploitation are a priority of my government,” Salvini said. “Out of control immigration helps the mafia, and therefore reducing arrivals” hurts criminal organizations.

Italy’s transport minister told lawmakers it would cost a maximum of 1 million euros ($1.16 million) and take about five months to repair the highway near Bologna, part of a key junction that connects highways linking northern Italy and the Adriatic coast, Italian news agency ANSA reported.