Italians among 6 trapped at 5,300 m altitude peak in N. Pakistan

ISLAMABAD, June 18 (Xinhua) -- A total of four Italian nationals and two Pakistanis got trapped at an altitude of around 5,300 meters after being hit by an avalanche in Ghizar Valley of Pakistan's snow-peaked northern area, officials said here Tuesday. 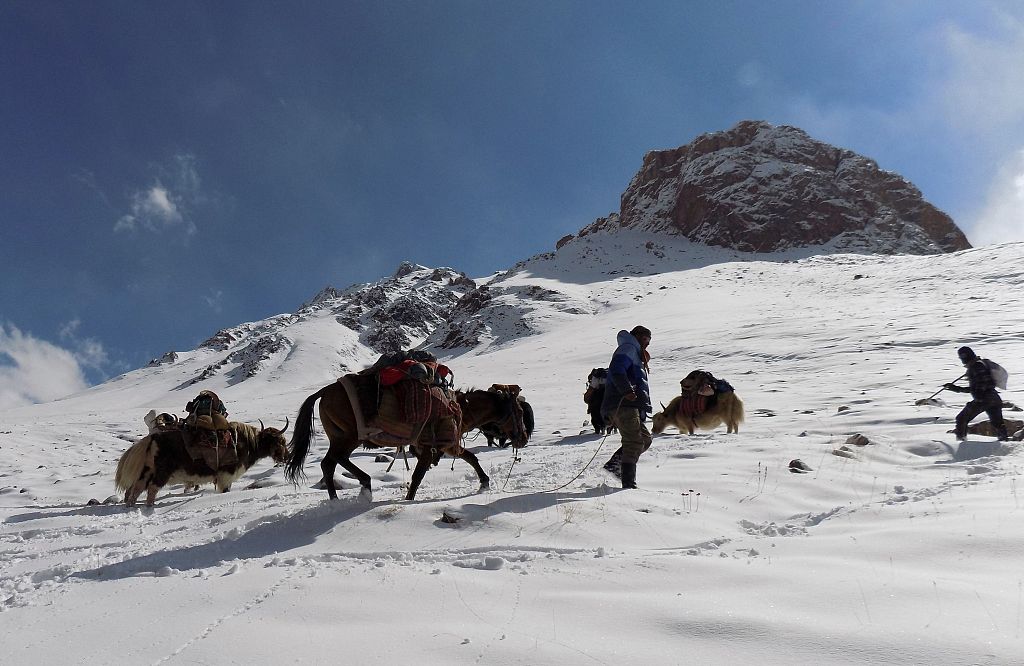 This picture taken on October 12, 2017 shows traders from Pakistan's northern Hunza valley travelling with yaks on a snow covered mountain near the Pakistani border in the Wakhan Corridor in northern Afghanistan. (Photo: VCG)

An official from Askari Aviation, a business enterprise working under Pakistani army, told Xinhua on Tuesday on condition of anonymity that the military has dispatched two helicopters for the rescue of the expedition.

Karrar Haidari, an official with Alpine Club of Pakistan, a non-governmental sports organization working for promotion of mountain related adventure activities, told Xinhua that a total of seven climbers including four Italians and three Pakistanis were descending after scaling a peak in Ishkoman Valley in Ghizar district when the avalanche struck them on Monday morning, adding that one of the Pakistanis were killed in the incident.

Haidari said that other members of the team received various degrees of injuries, and they are in contact with their local tour operator via satellite communication.

The expedition, Pakistan-Italian Friendship Expedition, comprising of Pakistani students, a travel guide and Italian climbers, started their adventure on June 2.

The rescue mission started on Monday afternoon, but had to be postponed till Tuesday due to bad weather conditions, he said. The official from Askari Aviation said that the weather in Ghizar is quite favorable on Tuesday, and the military is trying to recover the stranded climbers in the soonest possible way.

Pakistan's northern area is considered as an ideal destination for adventure tourists who throng to the country to scale its high-altitude peaks.

Several unfortunate incidents also happened to the expeditions on their mission. Earlier in March this year, a British and an Italian climber were killed while attempting to scale the Nanga Parbat due to poor weather conditions.