Rome (People’s Daily) - The International Olympic Committee (IOC) announced on Monday that Italy will host the 2026 Winter Olympics, beating Sweden in a vote in the first ballot.

The announcement was made in Lausanne by IOC President Thomas Bach. Milan-Cortina d'Ampezzo, Italian’s co-host city, won over its counterpart Stockholm-Aare at 47-34. 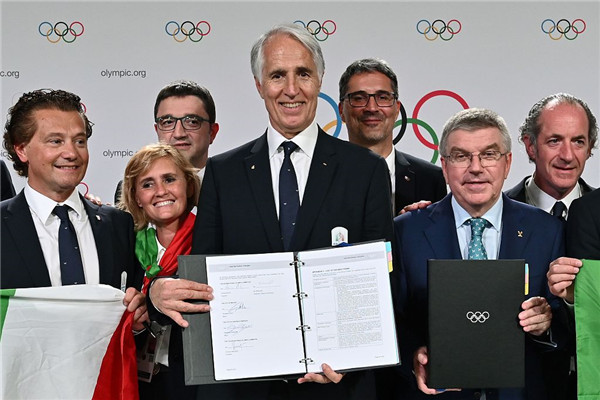 "It has been a long day. We have brought the Olympic Games back to Italy after twenty years,” said Armin Zoeggeler, winner of six individual medals of the Winter Olympic Games.

“We won, Italia! Italia!” chanted people across the country, thrilled with the news. Italian Olympic Committee (CONI) chief Giovanni Malagò said, “I am very excited, this is very important not only for me, but also for the whole country.” 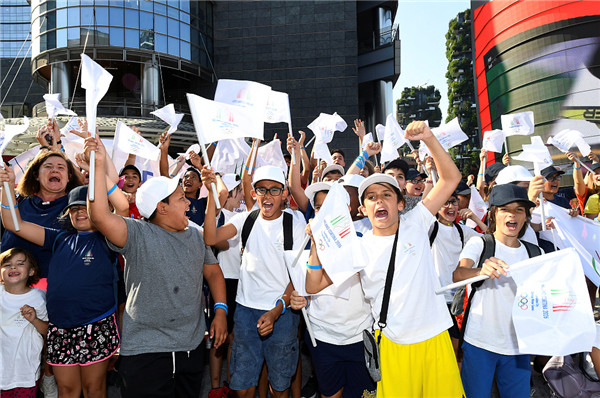 Italians joyfully react after being announced as the winning candidate to host in Milan-Cortina D'Ampezzo the 2026 Winter Olympic Games, in Milan, Italy on June 24, 2019.

Italians have shown their enthusiasm for hosting the Games and claimed strong government support. According to polls, almost 85 percent of Italians are in favor of the bid. Govanni, a Milan citizen, told the People’s Daily, “Italy has the advantage of natural conditions, while Italians have enthusiasm. We love sports, and would prove to the world that it is a smart choice.”

Italy’s Premier Giuseppe Conte spoke during the final presentation to support his country.

After the award, Giuseppe Conte tweeted, “We are proud of this great result! The whole country has worked together with the ambition of creating and offering a memorable sporting event to the world.”

"We had already started its preparations for the Milan-Cortina winter Olympics in 2026," said Veneto Governor Luca Zaia.

Thomas Bach congratulated Italy for the achievement in a statement, saying that he expected the Winter Games Milan-Cortina 2026 to display "iconic venues and beautiful settings, combining the attractions of a modern European metropolis with a classic Alpine environment." 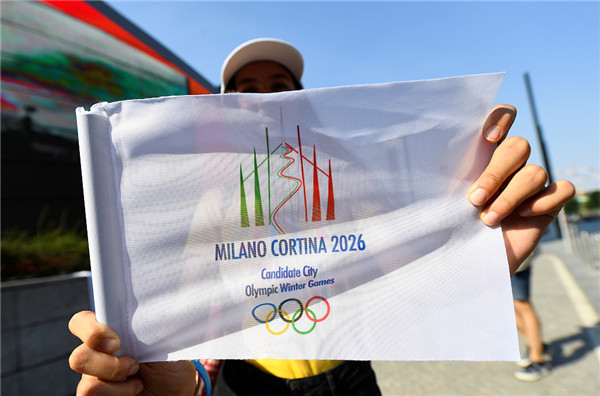 The logo for Milan-Cortina D'Ampezzo 2026 Winter Olympic Games is displayed as Italians celebrate after it was announced as the winning candidate on June 24, 2019.

According to reports, the budget for the Games has been estimated at $1.7 billion, more than half of which will be picked up by the IOC’s contribution of $925 million.

Recently, the Italian government’s spending plans have frustrated the EU. With the second highest debt load in Europe, Italy has experienced serious economic problems over the years. Aging infrastructure and an unstable political situation added to the worry and doubt about the country’s capability to hold the event. It is believed that the preparation would be a tremendous challenge for Italy.

But Italy has stressed that the Games will take place in the country’s relatively rich northern region, an area with busy airports, a network of high-speed trains and plenty of options for visitors, stressing that Italy has the capability.

Milan is Italy's major economic hub, while Cortina d'Ampezzo -- also known as the "Queen of the Dolomites," is one of the most famous ski resorts in the world and hosted the 1956 Winter Olympics.

Italy sees this as an important opportunity for the country, expecting a potential impact on the country's economy. According to a survey conducted by three Italian universities, the economic impact of the Olympics is important to boost the economy, infrastructure development and tourism for the region involved.

According to Italy’s Deputy Premier Matteo Salvini, there will be at least 5 billion euros (about $5.7 billion) in added value creating 20,000 jobs, as well as many new roads and sports facilities. “We will confirm to the world our excellence and our capacities,” said Salvini.