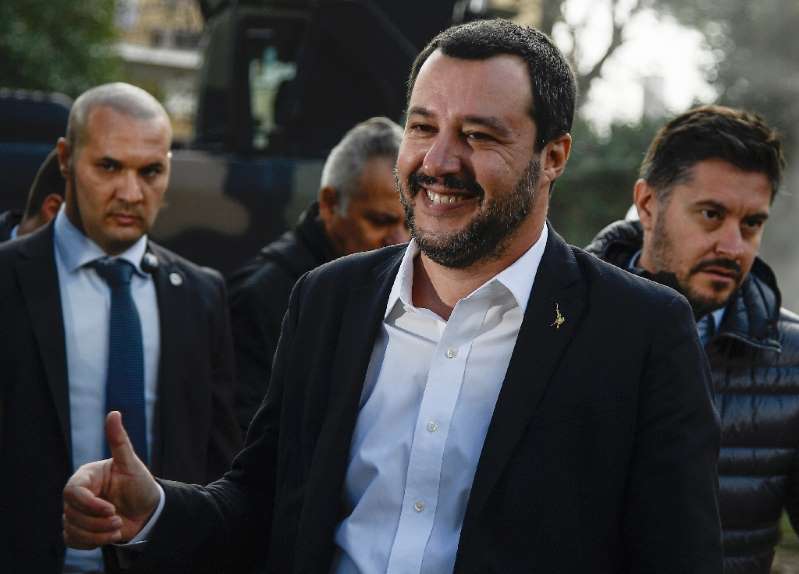 The bill, which makes it easier to expel migrants and limits residency permits, was passed in the lower house of parliament with 396 in favour to 99 against.

"I'm happy, it's a memorable day," Salvini told journalists, shrugging off criticism from "left-wingers who think illegal immigration is not a problem".

Parliament would have the last word on it and Rome would not attend a conference to ratify it, he said.

The Senate had already given its green light to Salvini's controversial decree, which the populist government of Salvini's League and Luigi Di Maio's anti-establishment Five Star Movement (M5S) first put forward in September.

As well as loosening the criteria to expel migrants, the bill allows migrants to be stripped of Italian citizenship if convicted of terrorism.

The government opted for confidence votes to get the bill through both chamber of parliament after M5S members tabled a slew of amendments.

The decree also ends two-year "humanitarian protection" residency permits -- a lower level of asylum status based on Italian rather than international law -- that were awarded to 25 percent of asylum seekers last year.

Instead, residency permits will be awarded under stricter conditions such as a one-year "special protection" status or a six-month "natural disaster in country of origin" status.

A new procedure to fast-track the expulsion of "dangerous" asylum seekers will also be implemented.

The Italian Refugee Council has said it is "seriously concerned" by the new law.

The United Nations refugee agency has said it does "not provide adequate guarantees, especially for the vulnerable or those with particular needs such as victims of abuse or torture".

Conte's statement on the UN pact was the latest sign that some countries who signed up to the agreement in July after 18 months of talks are now having second thoughts.

A week ago, Switzerland said it would postpone its decision on the UN pact owing to opposition from parliamentary committees.

Austria, Australia, Bulgaria, the Czech Republic, Hungary, Israel, Poland, Slovakia, and the United States have also either publicly disavowed the pact or notified the United Nations that they are withdrawing.

The non-binding UN accord lays out 23 objectives to facilitate legal migration as the number of people on the move worldwide has grown to 250 million, or just over three percent of the world's population.

Among its principles are the protection of human rights, including those specific to children, and recognition of national sovereignty.

Its objectives include helping countries deal with migration by sharing best practices to improve information and integration.

In October, Italy had registered 146,000 migrants on its territory, who could be regrouped in large centres to reduce costs.